We had a relaxing and fun two days in Biloxi, a place neither of us had visited before. One downside, however, was that when we showed up for the train tour of the city, we were the only ones there, and they canceled the tour. Apparently, our money wasn’t quite enough to make the drive around town profitable for them. OH WELL. 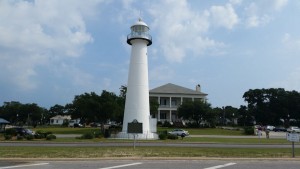 Built of cast iron in 1848, the Biloxi Lighthouse stands in the middle of a busy boulevard.

So, we walked across the street and visited the Biloxi Lighthouse, which has the distinction of being the only lighthouse in the world that sits in the middle of a busy city thoroughfare (years ago, the shoreline was extended in an effort to protect the seawall, putting the structure farther away from the beach). When much of Biloxi was destroyed by Hurricane Katrina ten years ago, the structure stood fast, even though the storm surge reached 21 feet. 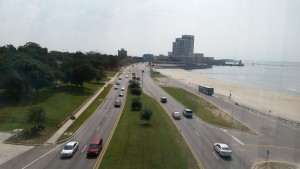 View to the east from the light room.

The trip up to the top is not for the claustrophobic. After climbing the spiral staircase of 57 iron steps, visitors must shimmy up an 8-rung ladder and through a 19-by-23 inch trap door to access the light room. Once there, you can see all of Biloxi on one side, and all the way to Gulfport on the other. But you don’t want to stay up there long — it was at least 20 degrees hotter in that enclosed space than the 90 degrees outside. Still, it was worth the climb. 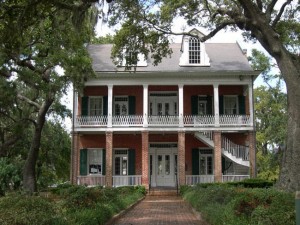 The Tullis-Toledano house, built in 1856.

Since we had no tour guide, we decided to take a drive around the city ourselves, armed with some basic knowledge the bellman at the hotel gave us. Biloxi was once the third largest city in Mississippi; it’s now the fifth largest, as much of the population moved away after the devastation caused by Katrina. Many historic structures — priceless places — were destroyed. Among the saddest of the storm victims was the Tullis-Toledano House.

When Katrina’s massive storm surge hit the Gulf Coast, one of the casino barges broke loose and crashed into the mansion, completely destroying it. The photo on the left was taken after the complete renovation of the place following Hurricane Camille in 1969. This is what the property looks like today. Tragic.

There are empty lots like this all over the city, right along the shore. The bellman told me that people simply couldn’t afford to rebuild; it was cheaper to move away, so many did. Still, the town has a family vibe, in spite of the overwhelming casino industry presence on the east side. There are probably 10 huge casinos, with more being built. I can see them through our hotel room window.

Today, it’s on to New Orleans for the main part of the Odyssey. We’re excited! I’ll post more tomorrow. Ciao!