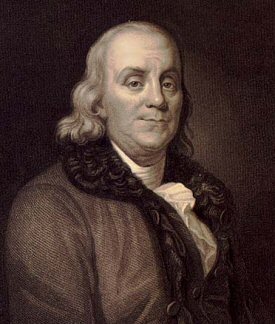 I seem to be on a history/nostalgia kick this week, so why mess up a good thing…

Don’t know how I got there, but I ended up on a site that listed all the things Benjamin Franklin accomplished in his lifetime. Suffice it to say that he wasn’t just the guy who discovered electricity and invented the lightning rod. Rather, I think I’d say that he was probably the most prolific and creative thinker of his generation – maybe of all generations. People like Einstein were brilliant, but usually only in one field of endeavor. Not so with Benjo. Have a look at some of what he accomplished, as compiled in world-famous Ben Franklin actor Ralph Archbold’s site:

But some of my favorite witty quotes were also spoken by Franklin:

Anger is never without a reason, but seldom with a good one.

Do not squander time, for that is the stuff life is made of.

Half a truth is often a great lie.

He that won’t be counseled can’t be helped.

How few there are who have courage enough to own their faults, or resolution enough to mend them.

I’m workin’ on that last one myself…