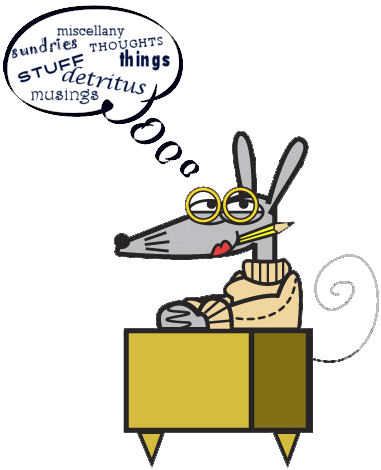 …than never, but I was busy thinking about stuff.

Fiends! Welcome to The Flip Side. What’s new with you?

In the six weeks since I last checked into my Finkweb dashboard (man, I had a lot of updates to run once I got here), much has happened, outside and inside my world. One good part was that my show opened and closed, and everything went pretty well. Another was the completion of the gray hair, don’t care odyssey. All the blond has reverted to its natural silver, and I must say I like it. As I told friends recently, with the blond hair went the BS. It’s been a jailbreak of sorts; I resolved to be more natural on the inside, much like my new outer appearance. It’s working. Whether it be my views on Common Core and high-stakes testing, or my slightly left-leaning opinions, or my white-hot hatred for mean people, I’m finally comfortable and in a completely good place, and if folks disagree, it’s OK.

In the more lucid seconds between the hours of insanity over the past month and a half, much has been revealed to me with regard to people’s personal thresholds, including my own. I find I’m less patient with — and more vocal about — ignorance, duplicity, intolerance, injustice and unkindness, personally, politically and socially. It’s not that I’m on a mission to provide all and sundry with my closest-held cultural views (indeed, this is not the forum for many of those issues), but rather, I’m less likely to be silent about my disagreement now. That’s the jailbreak aspect. I’m free. Well, freer.

Still, I’d like to think I’m the nice girl Mother raised. I’m not out to offend or shock (some folks really get off on that). I’m simply more likely to not stand by in silence while my sensibilities are being trampled.

With my dendrochronology running at 55 rings and counting, I’d say better late than never.

I thought I felt the Earth’s axis shift back into place this morning and low and behold Ms Fink is back!!! You know, my coffee just tastes better with you! Huge hugs to you my Fink Friend…I like the “freer” you am a big believer in always keeping it real. Oh yea, the natural gray…stunning!

Why thank you, friend! It’s good to be back — although I screwed up this morning by snoozing the alarm too many times. Have a good day down there in Sunnyland! <3

I hear ya! Oh and BTW “dendrochronology” translates to “old fart” in Dutch. haaaaaa

Nice to have you back. You’ve been missed. I’ll have to go to ole Webster for the definition of Dendrochronolgy. Thank you for todays lesson. Hurry back now…ya hear?

Thanks, Candy — great to be back! (And I had to look up the dendro word, too, so…haha)

Hey, welcome back! I’ve missed your comments. Sorry to be so tardy in reading this and responding. I’ve been enjoying “paradise” so much. I didn’t even check FB for two days. It is freeing to be authentic, even with hair color. Bonnie is not ready to take that step, still preferring to be “blonde.” I’m all for “civil” discourse regardless the subject or opinion. So much of dialogue these days seems to be attack, attack and attack. Really listening seems to be an art that is falling by the wayside. OK, stepping off the soapbox. I’m looking forward to the… Read more »

‘Bout time you get back in here!

I’m sure you’ve been enjoying everything Paradise has to offer — especially when you look at news reports of the Polar Vichyssoise that’s attacking us up here.

Well I have much more to write, but it’s 6:02 and I’m still in my sock feet, drinking coffee — something you pensioners know all about, right!?!? haha Don’t mind me. I’m just JELLYDONUT