And after the summer Ohio has had, a welcome one, too.

Friday night, after an especially stressful week, the Thriller and I picked up the grandsons for a sleepover, for what could be the last time until November. (I originally commented here, “Stupid rehearsals.” That was unfair. My rehearsals aren’t stupid — I actually enjoy them, most of the time — I just wish there were more hours in the day, that’s all.) It was a fantastic time, albeit too short.

We went to BFF Kay and Bob’s house (the gorgeous Thistlefink Gardens) for pizza and relaxation. We had great conversation over dinner, while Kay and the Thriller alternately handled face-cleaning duties as a result of the Js dipping their pizza slices in marinara — a dandy trick their Grammie taught them. That was a photo op in itself, but of course, I was too busy chowing down to grab my phone.

After dinner, the four boys disappeared outside, looking for some trouble to get into. We found them down by the creek: 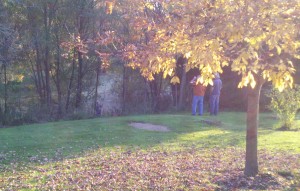 Bob threw down the gauntlet by tossing some leaves at Jake. And then, it was, as they say, on. 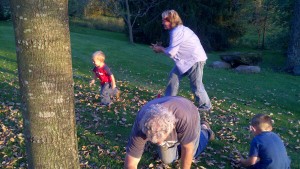 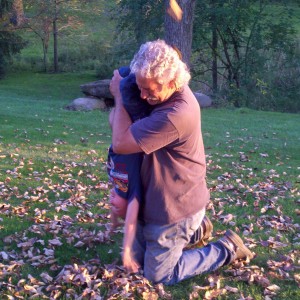 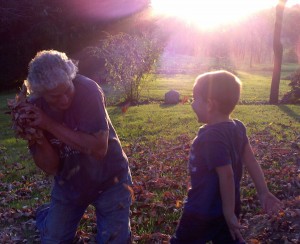 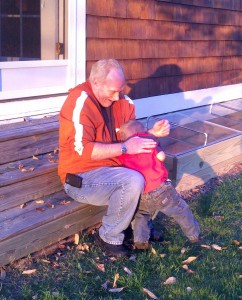 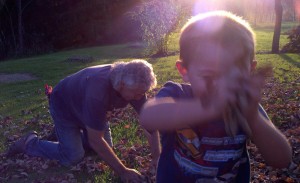 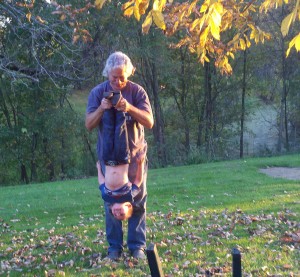 Too bad the weekend’s almost gone. Time to get busy writing parts for pit players, planting tulips, daffodils and hyacinths, and hitting Mansfield for some necessaries. We’re going to try and squeeze in a matinee of Ides of March, then maybe tonight I’ll get a chance to watch another episode of The Borgias (yes, we broke down and added Showtime) before the season finale of Breaking Bad.

Happy Sumday to you — if you’re in my neck of the woods, enjoy that summer-like weather. Come January, we’re going to wish it was back.