OK, so Bangor has about a dozen museums, and we didn’t go into any of them. Does that make us bad people? I guess I just had no interest in discoveries in Maine and transportation relics. Maybe on another day, but yesterday wasn’t it.

So instead, we went by Stephen King’s house (of course), played at the Hollywood Casino awhile (nice place), treated ourselves to Longhorn Steakhouse for dinner, came back to the hotel, did laundry, watched an HBO special on Jim McKay, and called it a night. Relaxing day, and we liked it. 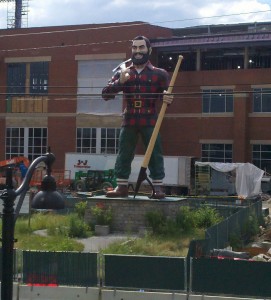 Oh, and we got a shot of Paul Bunyan from the parking garage downtown. There’s a bunch of construction going on around and behind him, so direct access was difficult, but at least I got a Muffler Man sighting in.

Yesterday’s real treat happened before we got to Bangor. On a whim, we said, “Hey, let’s take the Kennebunkport exit,” and oh my, are we glad we went for it.

Regardless of how one feels about George Bush I, you have to give huge props to his family on their taste in summer home locations. Not only is Kennebunkport beautiful and quaint and everything “New England,” it’s home to some of the most breathtaking beach mansions imaginable.

Ocean Avenue takes you on a lazy, winding tour of the extreme southern Maine shoreline. When you get to the western end of a peninsula, all traffic stops. They’ve even put in a “pulloff” place so folks can park (for 15 minutes only), look across the patch of land, and take photos of the Bushs’ home away from home. 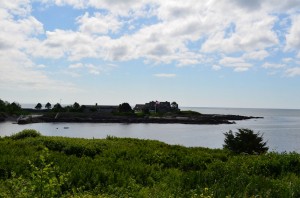 Of course, it’s heavily guarded — a reminder that the Secret Service stay with a former president the rest of his life. One look at the guard house at the end of the long driveway and it’s clear that none shall pass.

But what a location: right on the peninsula, with nothing on the other side except the wide ocean. Nice, eh? And nicer that the Thriller retrieved the telephoto lens from the car and got a much better shot of the home. You go, Nikon.

It made me feel a bit voyeuristic, but oh well. At least it was a slow day, and there weren’t many people there. 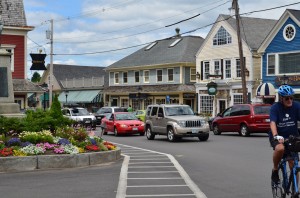 After the Ocean Avenue tour, we went into Kennebunkport proper to walk the town and have brunch. We stopped at a very small shop (can’t remember the name), and the Thriller ordered a bacon/egg sandwich, while I had an awesome raisin bran muffin, which the server pulled right out of the still-warm muffin pan.

As with many old New England towns, frontage is pretty much non-existent. The shops are right at curb level, and one has to wonder about the history of each building. Beautiful, quaint, friendly — it was a real jewel hiding on the shore.

Today, it’s on to Bar Harbor and Acadia National Park for some wandering around, eating, shopping, photography and eating. It’s supposed to be partly cloudy and 79; makes me feel bad for my family and fiends back in Ohio — to you I say, “Stay cool!”