After I got home at 7:00 last night, I did not feel like working. The Thriller and I watched some TV instead — I think it was the NFL Network. We watched a special on Jim “King” Corcoran. 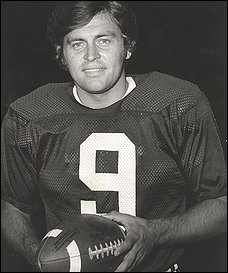 One word describes my reaction: speechless.

It was one of the more bizarre (yet completely entertaining) bio programs I’ve ever seen. It was produced by NFL Films. You have to watch it. No, really, I mean it. You have to.

As a 30-some-year football fan, I was surprised that I’d never heard of him. I’d seen the name “Corcoran” now and again, but apparently never thought anything of it or bothered to inquire. The Thriller’s first comment upon seeing footage of Corcoran later in life: “He’s a dead ringer for Gene Simmons!” Imagine my delight at finding out in later research that one of Jim’s famous escapades in Las Vegas involved his impersonating the KISS singer. Heh.

Honestly. You just have to read it to believe it. Then catch the NFL Network TV show. If you thought Joe Namath was a boisterous, self-absorbed, womanizing self-promoter, this guy will change your perspective forever. Like someone said in the TV special: “Jim was the ‘off-Broadway’ version of Joe Namath.” Very good assessment. Corcoran, for me, redefined “bizarre.” He was indeed Joe Namath — but with a raging personality disorder thrown in. Amazing. Truly, you have to read his story to get the gist. I’m shocked that even YouTube has nothing on him — no wonder many people hadn’t heard of him. But he is worth checking out, believe it. Wow.