Yesterday I had some free time, so I drove 25 minutes into Lincoln to the Grand Theater, where I saw Public Enemies. Grand indeed. 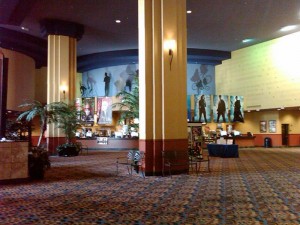 Upon walking in the rather basic looking entrance, you’re greeted by a cavernous Art Deco lobby, beautifully appointed and very clean. The white wall on the right of the photo features dozens of classic movie quotes. Great idea.

The Grand opened on 19 November 2004. It took the place of four smaller theaters: the Lincoln, which was destroyed to partially make way for the Grand, as well as the Cinema Twin, Douglas 3 and Plaza 4, which closed the night before the opening of the Grand.

The Grand includes over 3,000 stadium seats, and an arcade [called] “The Vault,” which features a 60,000-pound vault door purchased from Wells-Fargo.

The building is located right in the middle of the downtown business district; I had to park in a public garage. The auditorium where I saw the movie had the high-back recliner-type seats. And out of a city of 225,000 people, only eight chose to attend the 4:00 matinee. That was cool as well. Lots of room to stretch out. So I bought my small popcorn and Diet Pepsi and parked my bad self in the back section, front row. I was queen of the cinemarr.

I thought I would want to see it again and again, because, well, you know…it’s JD. But here’s the thing:

That said, the movie didn’t offend me completely. There was just not enough of a tale for my taste, and I found myself wandering now and again, looking at my phone, squirming in my chair, and thinking about how much I’d have to pay to escape the parking garage. But the experience of walking in that theater was worth it! Wow, what a place. It was fun.

OK, off to Day Two, with two presentations this afternoon. Concert tonight, then back on the road in the morning, heading for Ohio via a stopover in Quincy, I mean Joliet, Ill-i-noy.