Had a great Monday with BFF Kay. We left after lunch and headed to Cleveland for a day of shopping and dinner.

I generally loathe going school-clothes shopping, as I am both impatient and picky: mutually exclusive — and therefore, unfortunate — traits to possess. I want what I want, but I want to get it over with. Lucky for me, Kay is the same way. So off we went to turbo-bargain-hunt. It was a smashing success; awesome in every way.

Possibly the sweetest bargain was the discovery of a $120 leather purse marked down to $48 at Wilson’s Leather. Sweeter yet: they had two of them, so we both got one. Now we can do the whole “we’re twins!” thing. (Kay was less than delighted when I reminded her of this fun fact.) The bag is cool because while it looks dandy and can go anywhere you’d dress up, it also converts to a cute backpack. Score.

So seven shirts/blouses, three skirts, the purse and two pairs of shoes later, it was a good trip with great deals. Dinner was kind of weird, though. 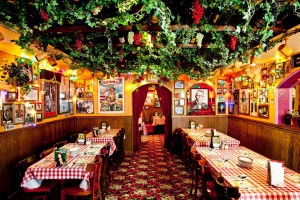 Neither of us had ever been to Buca di Beppo, so we tried out the one in Strongsville. First off, question: Why do they make it look like Italians have to have every inch of available space on a wall covered? Why is that necessarily an Italian trait? I don’t remember restaurants like these in Italy, and Kay, who has been there many times and as recently as a year or two ago, didn’t either. And even if they do exist there, it isn’t likely that it’s the representative norm. Anyway…busy and interesting walls, but that’s not the most memorable part.

You can tell the wait staff are well trained in their opening monologue. As soon as we answered that in fact yes, it was our first time at Buca di Beppo, we were taken on a whirlwind tour by Justin, who showed us the kitchen (complete with a table one can request in order to watch the food being cooked — no thanks) before seating us in the “peach room,” where someone had painted (stenciled) peaches on the walls. Not that you could tell, mind, because every available centimeter of wallspace was covered with vintage-looking photos. Think borderline-Italian version of Cracker Barrel.

The food was actually quite good, but the waiters in our dining room…yikes. Never in all my years of dining out have I ever heard such LOUD TALKING. I mean, these two guys came into the room and you pretty much had to wait until they left. There’s a point where you just know that everything they’re saying has been said a thousand times before, with the same inflection, word choice, and enthusiasm. Such was the case at BdB. It got old reeeeeeally fast. I hope they’re not all that way.

I’m a basically patient person (unlike BFF Kay), but by the time we left, I wanted to pretty much cold-cock the guy. That’s saying something.

Still, it was a beautiful day, and we finished off by stopping at Malley’s Chocolates so we could bring our husbands a fun chocolate treat. We’re awesome, yes.

Today, the Finkmobile goes to the doctor. Thermostat problems. The car has a fever. It’s always something, lemmetellya…

But happy day! One day closer to you-know-what.

2 thoughts on “Awesome and weird”