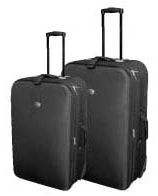 …Bernard Sadow. I’ll bet this is his favorite Gershwin tune:

When Bernie took his idea for suitcases on wheels to major retailers in New York City back in 1970, they thought he was nuts.

He’d received an epiphany while standing in line at customs in Puerto Rico and watching a man move some machinery on a wheeled platform:

I said to my wife, That’s what we need! We need wheels on luggage.”

Macy’s finally saw the light, and the rest is history. Where would we be without these wheely wonders today? Schlepping our stuff a lot slower. And it’s such a simple concept; one that definitely belongs in the “Wish I’d Thought of That” category, ja? Yep, happy birthday to luggage on wheels.

Who’s got the last laugh now?

2 thoughts on “And the award goes to…”