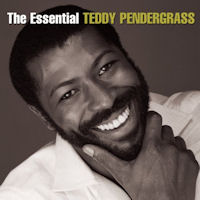 The R & B world lost another great last night. Teddy Pendergrass, formerly of Harold Melvin & the Blue Notes (remember them, fellow 70s people?), has passed away after colon cancer surgery.

I liked his voice a whole lot better than Barry White’s. In fact, BW kind of creeped me out. Not only did every song sound pretty much the same, but the constant, ubiquitous droning harmony (with himself) in thirds just grated on me like I don’t know what. No bueno. But back to Teddy.

He toured for several years in the 2000s, despite constant physical barriers he experienced as a result of a 1982 car accident that left him a paraplegic. His story is quite interesting. I had no idea about the trials — both figurative and actual — he endured while trying to physically and emotionally recover. Especially striking is the tactic his therapist used to cure him of his suicidal feelings. Have you ever heard of staging your own funeral? Whoa. I guess it worked:

“I had a sheet over my face,” [Pendergrass] said. “People were giving eulogies and talking about me as though I had gone. It helped me turn my life around. I didn’t want to be dead. I took away the option to die, and knew I had to live.”

Sad day. I liked his music. I also like how the animation on his website shows him walking. Cool.

Have a good day, fiends. My hatred component is on hiatus, temporarily. As Martha says, “That’s a good thing.”

I TOTALLY agree about Barry White–ewwwwwwwwwwww!!! Teddy had it goin’ on tho

I “third” that – LOVE me some Teddy. I only do Barry White tunes late in the night when my voice is trash & I can actually hit those low notes LOL

I have a lot of RtB catching up to do… life is finally returning to normal after a week in Sin City being a booth babe for CES. FUN