From the opening views of the farm in sepia tones to the incredibly short closing credits, you have to admit: there’s no other movie like The Wizard of Oz. They knew it then, too. Could be that’s why no one has ever attempted a remake.

I bought the 70th Anniversary Edition the other day, which WB just released this year. Kay came over to watch it with me last night. So many memories…I remember going to Mary Sue and Wendy’s house next door one year; they were the only people we knew at the time who had a color TV set. I’ll never forget it. The musical motif for the witch’s entrances, her laugh, when Miss Gulch turned into the hag during the tornado, when she turned to the camera and laughed at Dorothy through that magic glass thingy, when she wrote “SURRENDER DOROTHY” in the sky** — it all frightened me to death. Anyway…

You won’t believe the picture quality. I took a screen shot from the Flash movie on the Warner Bros. website that shows the comparison between the 2005 restoration and the latest one. 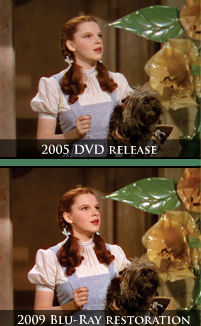 Such clarity. The way her shoes sparkled, the greens (especially the greens, yikes) — all incredibly bright. The groundbreaking techniques MGM used to incorporate Technicolor — then a brand new effect — into a black and white film made the movie even more of an elite fantasy; something no one had ever seen before.

The accompanying bonus disc was quite interesting. Many of us know the basic trivia (Buddy Ebsen was the original Tin Man but was hospitalized for weeks for breathing in the aluminum dust from the makeup; Shirley Temple was asked to play Dorothy, but Fox wouldn’t loan her out; Bert Lahr’s lion costume weighed 90-some lbs.), but here are some facts you may not know:

There are dozens more of these entertaining factoids; too many to list in one post. I say you should rent/buy this DVD (I paid only $15 for it at Target) and enjoy some memories of your own.

** The skywriting bit was filmed by holding a camera beneath a glass table and having someone write “Surrender Dorothy” on it using a syringe full of ink.

And that picture is why once you go HD, you never go back.

Yeah. Once in awhile I’ll accidentally switch to a non-HD channel on our TV, and be reminded of what we once thought was a really clear picture. Geez, we are spoiled rotten!

Margaret Hamilton (the witch/Miss Gulch) was a kindergarten teacher who moonlighted in films. She was badly burned during a “disappearing sequence” in Munchkinville. The “Jitterbug” sequence/song was cut from the final film as well as the Renovation Scene from Emerald City. As kids we used to go over to my grandmother’s house to watch the movie as she was the only one in the family to own a color set.

Yep! The bonus DVD has her voice overdubbing that scene, describing what happened. She credits a stage hand with saving her life.

It also shows the entire Jitterbug song…ugly and bizarre. Harburg and Arlen apparently had a deadline to meet.

I love love love that movie! One of the stations in the UK showed it a few weeks ago and I watched it. Before they aired it they had a show that sounds like the bonus DVD with interesting factoids. I always cry during Over the Rainbow. And well pretty much through most of the movie!! I, too, went to Grandpa and Grandmas to see it for the first time in color.

Me too, Suz – it always gets me. And the fact that she was so young and so incredibly in control of her style…it’s amazing.

OK – I must go out & look for the BluRay version of this. Wonder if I can rent it at B’buster? The store right around the corner has a really good BD selection. I’m with you on watching HD-only channels. And good news – Verizon recently added AMC in HD!! Just in time for me to watch the last 3 episodes of MM in BEE-YOUUUU-TEEEE-FULLL HD!!

Yay for MM!!! And I must say it looks fantabulous on our 5-foot-wide TV screen. Maybe that monster isn’t so bad after all.

I am so looking forward to getting to write about this movie. Should be a few days after Christmas so maybe I’ll be able to pick it up on Blu-Ray around then as a refresher.

I like your lists, Will. Love the movie nerd in ya!