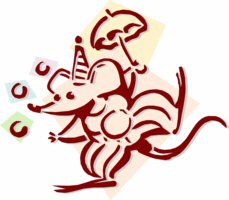 I’m finally starting to get it. Statistical research, I mean. That is to say, I am finally starting to scratch the surface of beginning to consider knocking on the door of the possibility that I might see a day in the distant future when I could conceivably entertain the notion of getting it.

After a 2-hour tutoring session on the phone with a friend in Boston yesterday, I feel better about it. Lisa, if you’re reading this…I worship you. I am starting an official cult in your honor: the Lisans. After I pass these tests (fingers crossed at the possibility), I will make a pilgrimage to your home in Massachusetts to sing your praises in person, and to lay flowers in your French horn bell, cuz, you know, that’s about all it’s good for lately since you haven’t been practicing. 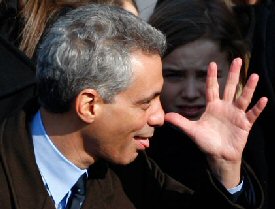 Now, some people would say this kind of behavior at a presidential swearing-in is inappropriate; others might say that it’s about time some new, young, energetic and non-stodgy blood was in and around the White House. But honestly, if you know the world media will be there, snapping photos hundreds of times per second, hello…ix-nay on the Dennis the Menace while your boss is invoking Martin Luther King and Abraham Lincoln. Just sayin’.

In other news: coffee is a good thing, which will become more important to me as August gets closer…yeesh.

All right, fiends. Off to make the donuts. Happy Monday. Ugh.

As Gleason used to say, “Baby, you’re the greatest!’

No need to thank or worship me, Jax. If I didn’t have you offering up this incredible support and assistance, i would NOT be able to do this.

Good for you, girlie. Hang in there, both of ya’s.

As for the Chief of Staff’s razzberry, I can only hope it was directed at the former Vice President, who rudely refused to stand during the swearing in. Where are the pictures of that sorry korj, I ask ya???

PK! How you doing, friend?

Cheney, at least by what I read, was in a wheelchair. He hurt his back while lifting boxes and I guess it was doctor’s orders. Ouch!

OK I have to ask…what’s a korj? Sounds like a word I want to adopt into the Fink Lexicon of Derogatory Epithets.

Hmmph. Doctor’s orders, eh? Well, we’ll leave that one alone for now, since this is a family-type blog. I also read about a rather interesting exchange between Mr. Cheney and news reporters just as Mr. Cheney was leaving Washington later that same day. Didn’t sound pretty to me. *** Korj absolutely deserves adaptation into the Fink Lexicon as the worst swear word in the world; even worse than the ones expounded upon by Dr. George Carlin in his extensive and exhaustive lecture on same. It is so bad that nobody knows about it. Except you and me, of course, and… Read more »