You might have read that Michael Vick, former NFL quarterback doing 2 years at Leavenworth, plans to file for reinstatement to the league after pleading guilty to running a dog fighting ring. He hopes that his admission of guilt will shorten his sentence.

Now I believe that someone can do wrong, then rehabilitate. If NFL commissioner Roger Goodell thinks Vick has paid his debt and it’s all right for him to go back to playing football, then that’s his call. I do wonder if the ticket-buying public will completely accept him back, but then again, I’ve heard it said that pro football is more about revenue than football, so…

But why did Vick (and his pals) do this? Certainly it wasn’t because he needed the money — although I guess he needs it now because he’s broke, which makes me wonder how anyone could go through $130 million in such a short time. Still, how could anyone do this and sleep at night?

This is Lucas. He was Vick’s #1 champion fighting dog. His face is torn up with scars. He’s being rehabilitated by some great folks at Best Friends Animal Society in Kanab, Utah, along with 21 of the 47 Pit Bull Terriers seized from “Bad Newz Kennels.” 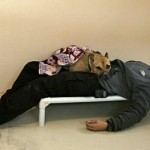 Georgia, seen here taking a siesta with her handler, was likely one of the most abused of all Vick’s dogs, according to the feature I read. Vick hired a veterinarian (who should have his/her license revoked forever) to pull all 42 of Georgia’s teeth, presumably so she would not bite the male dogs she was repeatedly given to for breeding purposes.

The New York Times article also tells about another Vick-tim named Cherry, who…

…is so terrified of people that he won’t walk on a leash. He just prostrates himself and refuses to budge, so he has to be carried everywhere. Later, when he is finally persuaded to take short walks, he skulks, pressing himself against the nearest wall or fence, as if trying to be invisible.”

It is thought that Cherry was used as a “bait dog.”

Again, I ask: Why would someone do this to an animal? I’m no extremist, but to me, torturing a living being that cannot defend itself, or that does not know what is happening to it or why — for entertainment, fuh cripesake — is the lowest, most vile form of cruelty. The whole mess just makes me seethe with rage.

I believe that the people who did this lack a specific chip in their brain circuitry. The empathy chip; the human decency chip; the Dear-God-Don’t-Make-Me-A-Sociopath chip. Seriously, something is wrong with these guys. And they’re not alone.

In my life, I’ve seen people slap, punch, kick, scream at, and basically try to scare to death innocent dogs. I’ve heard of people feeding them alcohol until the dogs pass out, vomit, or stumble around and hurt themselves. To those folks, I say c’mere. Gotta tell you something. Take your dog to the nearest animal shelter. Then get a cat-o’-nine-tails, remove your shirt, and flog yourself unconscious. Have a friend coat your bed with salt and place you in it. Simmer. Wake up. Scream. Rinse. Repeat.

I think all dog owners should live by this list:

Our dogs probably think the sun rises and sets on us, and they want nothing more than to please, and be loved by us. We need to give them the chance to do that.

Sure, release Vick early. But release him to a halfway house and give him a job, lasting for the remainder of what would have been his prison term. Put him to work in a local shelter, or in a vet hospital where abused animals are treated.

PS – National Geographic produced a special about Vick’s dogs. I’d like to see it when it comes around again.

PPS – Browns fans: interesting article off the AP wire yesterday (although I don’t know where ESPN gets off coding the link I clicked to say, “Browns owner puts Crennel, Savage on notice”).