…Phil and Romeo are gone. 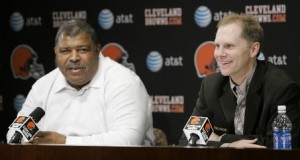 Crennel and GM Savage get the bum's rush
If you root for a consistently losing team, you know the feeling. The only term I can think of for it is “hopeful unease.” Now that Bill Cowher is apparently out of the running to replace Romeo as the head coach of the Browns, I fear that owner Randy Lerner and the Berea Boys will do what they’ve always done: just find whoever is available and offer him a contract.

Of course, every Browns fan with a shred of loyalty will still hope against hope that whoever they do hire will change things around and start winning.

But if history is any indicator, we’re screwed there, too.

I mean, the Browns had Bill Belichick when he sucked as a head coach. They fired Marty Schottenheimer because we didn’t make the Super Bowl (was it bad coaching that caused “The Fumble” and “The Drive?” I think not). The Browns were sold off — lock, stock and barrel — by Art Modell. At least we got to keep the name, colors, mascot and archives. But lately, it seems that’s all we have left.

Still, hope springs eternal in the hearts of those accustomed to saying, “Wait till next year.” In my 30-year tenure as a Browns fan, and 20-some years rooting for the Indians, I can tell you that although it does get old (the constant disappointment), it never really gets old enough to make me throw the teams out the window. I still love them. Say what you want about how college ball is “more exciting” or “done for reasons other than money” (although I could argue that point and win) — I still love pro sports, and I am an unequivocal, shameful contributor to the outrageous salaries its players pull down. Meh. It is what it is.

Hey, I get to see Jakey in exactly one hour. I better get a move on into the showers. Yay!

Go Browns. Go get someone decent this time. Sheesh, Randy.

As a Cubs fan for 55 years, I feel your pain. (You knew I’d say that!) I’ve followed the Browns only minimally, and the Indians even less. I just can’t take on any additional pain. But, right now, I’m very peaceful and relaxed in sunny and warm Florida except for accessing office emails and working on future projects. I hope the Browns come up with a GM and coach who can lead them to the Super Bowl. Maybe Marty is available! ReplyRat Fink Reply:December 30th, 2008 at 3:29 pmHey RD – glad to hear you’re having a good time in… Read more »

Mark my words… the new coach of the Cleveland Browns will be, Eric Mangini. ReplyRat Fink Reply:December 30th, 2008 at 5:28 pmI agree, Kody. I just hope if they do hire him, he’ll get some people in who can help him win. His recent record with the Jets was nothing to write home about. Then again, I just read a comment (they’re all hilarious) on the ESPN article about it: Magini will get the job & retain Crennel. Pioli will take over the GM duties and they will sign a young offensive coordinator and in 2-3 years he will have… Read more »