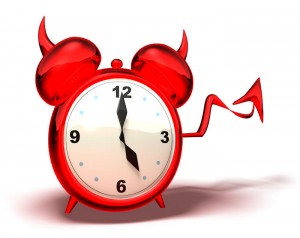 …the dreaded, evil alarm clock has been set for tomorrow morning, and Christmas break is over. Wow. Know how much work I got done for school over the last two weeks? Next to none. But — part of my new year’s resolution from 2012 was to spend less time at school; to leave work at work. I think I’ve managed to continue that promise into 2014, so thumbs up.

Either that, or I’m just incredibly, unforgivably lazy. Ha.

Time was, I’d stress and worry so much over not getting enough done over a holiday break, it would effectively ruin the last few days of each vacation. How dumb is that? So, the work can wait. It can wait. Does it sound like I’m still trying to convince myself? I probably am, but hey, whatever gets you through the night, right? It’s all right. It’s all right. 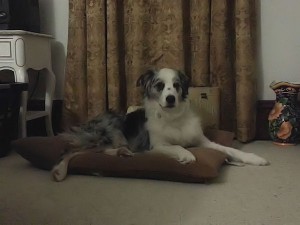 He likes his bed

Obligatory Remington Update: He’s fearing the Thriller a tiny bit less. A tiny. When he uses the clicker and the training treats, Remy will come to him quicker — still in a herding crouch (like this, except with his head closer to the floor), but he’ll do it. This morning, however, when he went to feed him breakfast, Pup cowered under my desk and wouldn’t come out, even for clicker treats. He lay there, petrified, licking his chops for the meal he obviously wanted, but couldn’t pull the trigger to go eat, as long as the Thriller was in the kitchen. So, a step forward and two back, but still…progress.

The level of sheer terror in this poor animal breaks our hearts.

However, he’s acclimated himself seemingly 100% to his physical surroundings, so tonight, he and I will move upstairs to the 3rd floor master bedroom. I’ve been staying in the guest room with him these past two nights because it’s a smaller space, and if I needed to get him outside quick, there are 13 fewer steps to navigate. It *appears* (knock wood) that we are going to have no housebreaking problems. We have not crated him, and he’s basically had the run of the second floor hallway. Treading lightly here, but no problems so far.

Today’s test will be guests. Seamus and the gang are stopping by to visit, so we’ll see how much time it takes him to come out from his safe space to greet more men and children. Haha. Remy, Remy…what a ding dong.

4 thoughts on “And with that…”