Last night I was recording some Romantic era stuff for my music history class, and ran across “Nessun dorma” from Puccini’s opera, Turandot.

Pavarotti. Like Elvis, Madonna and Prince, he’s known worldwide by simply one name. I know there are opera singers out there who think it’s passé to like Pavarotti, but I don’t care. OK, so maybe he was a total brat sometimes, but he was also funny and silly, and I never saw an interview where he didn’t win over the journalist, the crew, and anyone else watching. 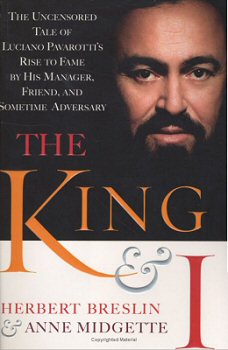 I read the tell-all book by his former manager, Herb Breslin. The King and I was a bit harsh on Big Luciano, but I’m sure it had at least some truth to it. I mean, you can’t be that adored the world over and not be a spoiled-rotten baby some of the time. [I think I still have the book if you want to borrow it…or maybe I gave it to Kay to read on the plane. Can’t remember.]

But back to The Voice.

He was one of the few singers who would barely move his face and still reduce you to tears. Quite possibly the most beautiful operatic aria I have ever heard has got to be his rendition of “Nessun dorma.”

If you’d like to see it, here it is. If you’re not an opera fan, it’s ok. You don’t need to be. The only thing you need to enjoy this video is a soul.

The story of the aria is this: The prince has solved all three riddles in order to win the hand of the princess in marriage. She fears the prince — he’s sort of a cad. He tells her that if she can guess his real name by tomorrow morning, he’ll go away and call off the marriage. But he knows that his identity is secret, and that nobody, even if they stay up all night, will guess it. Therefore, he sings “Nessun dorma” (None shall sleep).

He ends the aria with the powerful declaration, “Vincero!” (“I will win!”). I heard he had the same attitude when pancreatic cancer was tearing his insides apart. He lived a full life — the cancer finally won in 2007 when he was 71 — but still, he was taken away too soon.

The most amazing thing about this performance is that he was 62 years old when he did it. Incredible.

Give yourself three and a half minutes of beauty today. Watch and weep.
[quicktime]https://finkweb.org/wp-content/uploads/2008/04/13a5b039dc2ddb11924c1eb6bac2dceb.mov[/quicktime]

2 thoughts on “And they leapt to their feet…”