Last Friday night, I went to my son’s house and played the Rock Band video game. I stood and watched for awhile, then jumped in. I sang “Long Time” by Boston, then launched into “Enter Sandman” by Metallica (fuzzy cell phone photo by B.J. here). Son Sean is playing “bass,” Lance is on “guitar,” and their friend Mark is on “drums.”

It was especially hilarious because all the people in the photo are actual musicians. So, why weren’t we making “real” music? (I had a discussion about this at a Summer Solstice bonfire I attended the other night, too.)

Well, I think part of the answer is “the challenge.” How close to the original — right down to the singers’ inflections and the players’ licks — can you get? It’s not as easy as you think, when every aspect of your “playing,” from rhythmic integrity to intonation, is taken into account when assigning the scores. The biggest difficulty for me was to avoid the temptation of putting my own licks in. That gets points deducted, Skippy. Found that out the hard way. 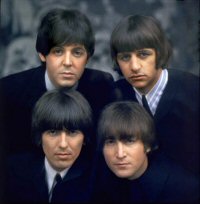 And here’s something new. According to this article in the London Financial Times, Apple Corps, the company started by the Beatles to control their empire…

…has become more active in recent months since Jeff Jones took over as chief executive. The company, whose board includes Paul McCartney, Ringo Starr, Olivia Harrison and Yoko Ono Lennon, has allowed Beatles compositions to be used on American Idol and in a Las Vegas show.”

So it appears that the iron grip on the Fabs’ music in the mainstream might be loosening a bit, thanks to this Jeff Jones guy, whoever he is. I had a discussion over coffee this morning about this very issue. Mavis was unsure about the whole idea, her comment being, “Is nothing sacred anymore?” She worries about the trivialization (read: overt commercialism) of the Beatles catalog, basically opening it up to be viewed as video game fodder and not creator of the singular defining musical epoch in the history of pop culture (which it is).

I said I thought it was about time that Beatles music joined the mainstream because of the new fans they could attract — fans who would likely not bother with a lot of their music if it weren’t in a video game.

What do you think? Feel free to weigh in on the matter.

Personally, I will be first in line to beg my son to download the entire Beatles Xbox catalog. But that’s just me being silly. And I am not going to become addicted to Rock Band. I can stop anytime I want.

Fink out (to look at the latest Xbox song packs).

I just stopped by your blog and thought I would say hello. I like your site design. Looking forward to reading more down the road.

Wait, what? Video games….you? *Looks around expecting the sky to fall*

In all honesty I agree though, there are a lot of people who have picked up some of the classic rockers because they’ve played their music on Guitar Hero/Rock Band. Truth be told, I’ve done it with a group or too.

Heh heh. Yep, Mathew. I took the leap. Never thought I would (and you didn’t either, I’m certain!). I agree that it’s a lead-in for some people to discover bands they didn’t know about before. Lord knows I heard a *bunch* of tunes that night that I didn’t know before.

Only slight negative for me: it’s a sing-along. I mean, the vocals are muted somewhat, but you can still hear them. I was just a little disappointed there…but then again, if the vocals were missing, it’d be karaoke, and we can’t have that, now can we??

You’re all nuts! Bring back the record player with the diamond needle! Bring back the 45’s so you can listen to the Beatles the way they were meant to be heard! :p~~~~~ I know, I know…hang Mavis in the Smithsonian.