…heh, I only *wish* I had a T-bird. Do they even make them anymore? [Well well, it appears that they do. Let it be known that for my __th birthday in August, I want a new car. Milestone age deserves milestone wheels.] 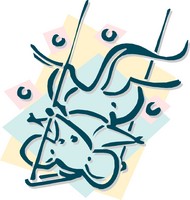 But I plan on having some fun at rehearsals this week — maybe not as much fun as balancing on my head while juggling on a swing, as pictured at left — but fun nevertheless. The show has now passed the “dear-God-what-have-I-done” stage, which is always nice. Granted, it passed it *just* a bit later than I would have liked, but it’s getting there. Lots of loose ends to tie up, though. Lots.

Today’s RNF is a bit of a self-flagellation. Come on, you know I deserve it. I harangue and rant all over this space, and you shew forth all longsuffering as a shining example to me. Therefore, I admit that there is reason for me to back off, chill out, relax, breathe, and not kill people.

Things That Are OK After All

All right. Time to continue working on yesterday’s list. I’m still on #3, but I’m determined!

You plan on having fun at rehearsals this week!? *gasp* You mean…you haven’t been having fun the entire time!? Ha. Well, at least the show has passed your “dear-God-what-have-I-done” stage…and it has passed that stage faster than Annie. Yikes. ReplyRat Fink Reply:March 15th, 2009 at 3:48 pmMeggles – AGYG had its moments, but I thought it was great in the end. I’m thinking it was slower than this show, yeah. But it’s also a different animal. Like I said, there are many loose ends to tie up…and I am determined not to tie them up around your pretty little necks!!… Read more »

Remember, at least it’s not Anything Goes.

Mathew, for many, many reasons…that show stands alone.

Come on — be nice to da Fords!