How about some cool school trivia? 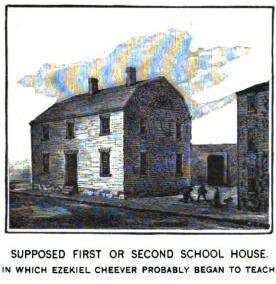 Well, look at the school now. We’ve all come a long way, baby. But…

And schools, like countless other American institutions, changed with the times:

And everything old is new again.

The agrarian school calendar has repeatedly come under fire. Personally, I think it would take a huge influx of cash and a systemic overhaul of union practices to pull off year-round schooling, so I don’t see it happening nationwide for a long time. And further, if you’re really a stickler for semantics, we don’t have a truly “agrarian” calendar. According to Dartmouth professor and researcher William Fischel:

The “agrarian calendar” was not the current calendar of fall-winter-spring. [C]ities in the late 19th century had school in the summer. Nobody had AC back then, so going to school or working in a hot factory was not a big deal. The real reason for the Sept to June calendar is the widespread adoption of age-graded schooling. Rural schools of the 19th century did not have age-specific grades, and so they could have a “term” of school whenever they wanted for as long as they wanted. But age-grading required coordination among different schools. You had to start and stop at the same time so the third graders could start fourth grade together with those from other schools.

Well isn’t that interesting. Teaching all these years, and never knew that. And if you’re still with me by now — did you enjoy this little Saturday lesson? Feels like school, no?

I think I’ll break with tradition and have some coffee this day. Resolutions, shmesolutions.

I had to create a timeline of education for TA. It’s astounding how different it is today.

Also, I enjoy the tooth and unibrow look I get every time I post here.

Only the best for you, doll!