Considering the proliferation and popularity of today’s game/quiz/reality shows and their enormous cash prizes, it should be no surprise that people will do pretty much anything for money and press. From has-been celebrities degrading themselves in a hot tub with other ex-famous weirdos, to people eating sheep intestines stuffed with live cockroaches, the bloodlust for the 15 minutes of fame – and the payout that comes with it – is irresistible to many.

Although the use of deception to win a game on TV is standard operating procedure today (think Survivor, Big Brother, etc.), it was almost unheard of in the early days of television game shows. Do you smell a story here? Read on…

NBC aired a quiz show, Twenty-One, in September of 1956. Big problem: the premiere was a disaster (contestants looked ridiculous, missing the easiest of questions). Bigger problem: its time slot was pitted against the megahit series I Love Lucy on rival network CBS. Geritol, sponsor of the Twenty-One show, told producers to find a way to get more viewers, or they were pulling out.

Somewhere, at some point, for some reason, the suggestion was made to rig the show by giving contestants answers ahead of time. 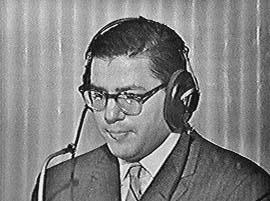 Enter Herb Stempel, a teacher from New York who had a great memory. Using the cheat system the network provided, he won lots of money and ratings soared. Classic case of “Regular Guy Wins Big.” But it didn’t last long.

Stempel wasn’t a pretty man, and producers feared he was a turn-off, especially to women who watched the show, and wondered how long the perspiring nerd in the big eyeglasses would hold the attention of the American public. Their answer came in the form of mild-mannered, Charles Van Doren. 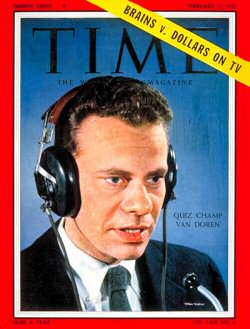 His parents were writers, and he was an English professor at Columbia. He was pleasant, well-educated and suave. Stempel was instructed to lose to him, which he did, although he felt betrayed and hoodwinked by the producers (and the irony hangs in the atmosphere…). Van Doren’s star was on the rise; talk about an “American idol.” How big a sensation was he? Big enough to make the cover of TIME.

Now it was Van Doren who was fed the answers. He was good at all the gestures, facial expressions and pregnant pauses. Quite the actor. The public had a new working class hero, and the producers had a hit show. There was just one problem…

They forgot about Herb Stempel.

Hurt and angered by the treatment he received from NBC, Stempel called the authorities and reported the cheating scam. At first, few paid attention to him, probably attributing his ire to sour grapes. But when a rival game show contestant came forward with similar charges, people took notice. Twenty-One, along with a bunch of other quiz shows, was canceled.

Van Doren vehemently denied any wrongdoing. He, along with others involved with Twenty-One, said as much in testimony to the grand jury that convened in New York to investigate the allegations.

Eventually, it all came out and Van Doren could lie no longer. His slightly less-than-sincere testimony included an indictment of the network as well:

I was involved, deeply involved, in a deception. That fact that I, too, was very much deceived cannot keep me from being the principal victim of that deception, because I was its principal symbol.

Van Doren lost his job at Columbia, everyone was disgraced, and the era of the quiz show craze was over.

And here’s the biggest irony: Van Doren lied to a grand jury – which is a felony – about something that was not even illegal.

PS – In 1994, Robert Redford made a movie about the scandal. It was nominated for many awards, including Best Picture at the Oscars. I never did see it, but I think I might rent it. Maybe this weekend.