Last night fizzled. It was supposed to be dinner-and-movie night for the Thriller and me. The dinner part worked fine, but then our video-on-demand service died, 30 minutes into the movie. Hmmm. 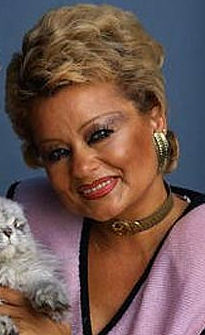 After calling the cable guys, the Thriller decided to go downstairs and watch the ball game, and I stayed on the sofa (drugged with DayQuil/NyQuil…stupid cold, ugh) and flipped channels, passing the time before passing out. I ended up on CNN, where Larry King was celebrating his last 25 years in the interview business. He had many predictable and entertaining favorites (Bette Davis, Johnny Cash, Elizabeth Taylor, Marlon Brando), but one of his top picks really struck me as odd: Tammy Faye Bakker. He’d had her on his show several times over the years. What was the draw? I had to find out.

I did some research this morning on Tammy. Turns out I didn’t really know much about her, despite having her overpainted face taking up my TV screen every night as a teenager (my parents were staunch PTL devotees). After my hour of looking at vids, transcripts and pictures, I decided that regardless of what happened to the PTL network and all the craziness and criminal activity, Tammy was always Tammy. She described herself and Bakker as “two kids who hadn’t even graduated from college” heading up a huge empire and eventually falling for the glitz. Here is a picture tour of the deterioration of Heritage USA, the dreamboat of the Bakkers that eventually sank when Jim Bakker sold way more $1,000 PTL memberships than he had rooms to house them (everyone was promised a free stay). After the revelation of his tryst with Jessica Hahn, the whole project was pretty much in the crapper. I can only imagine the panic…

Anyway, her seemingly unabashed honesty continually impressed me. Faked or not, it was compelling. She said in one interview:

I never dreamed that someday, my name would be known everywhere. Only God could do that for somebody with no talent. Thank you, God.

Here is a clip from her final interview, where she talked candidly with King about the inoperable cancer eating up her lungs:

She died the next day.

So, Larry and Tammy — I never would have understood the attraction. But after watching videos this morning, I realized that she might have had a hidden grace; a dignity that the press (and her dedication to the clown makeup) never allowed to shine through.

Now to the sofa, with a blanket and Kleenex. *sniff*

6 thoughts on “An odd couple”