It’s become somewhat of a cliché in this country: “You don’t know how good you have it until you go somewhere else.”

It’s also been said that you don’t see how bad it is in America until you go somewhere else and notice how good things are. Well I guess that’s what makes a world. All different opinions, yippy. It’s become standard fare in the tragically hip circles to basically berate everything US-related, from policies to politics to excess to the health of it citizens to the debauchery of its national image. It’s easy to jump on the Whiny Wagon, really. I’m not knocking it. There are lots of things regarding the future of this country that I worry about, too.

And then there’s this, which puts us on the Perspective Bus bound for Clarity: 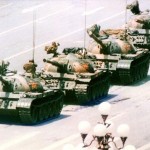 This picture (by Jeff Widener, AP), taken in 1989 at Tiananmen Square in Beijing is now legendary. It’s known everywhere as the “Tank Man” photo — everywhere, that is, except in China.

I did some research this morning on what happened to the big (albeit brief) push for democracy in China, and what the consequences have been. I came across an article by Geoff Calkins of Memphis Commercial Appeal.com. He’s apparently in Beijing to cover the Olympic games, and filed this report.

In case you’re not up to reading it, Calkins recounts his experience of going to Tiananmen Square (a tourist hotspot in Beijing) and asking a young Chinese woman where the place was that the “Tank Man” stood back in ’89 — and she had no idea what he was talking about. He says she was genuinely puzzled. She really didn’t know. He then got curious and did some web searching:

This goes on and on. Mao has become China’s shopping-mall Santa. Tank Man did not exist.

“What do you think of our country?”

I think it is not the United States.

Which is not to say the United States is perfect. But if you type “Kent State” in Google, you’ll get a full report.

I type “Tank Man” in Google.

Maybe it’s the Internet connection at the media center. I try “Mao is great.”

Suddenly, the connection is working. Gee, what are the odds?

Interesting. We joke bitterly about “Big Brother” watching us over here in the States, and big government invading our privacy. But we’re still free to watch, listen to, download and say just about anything we want.

Let’s face it: every action has consequences (or an equal and opposite reaction, whatever). We are walking, breathing results of our choices. So are countries and governments. I guess we’re all reaping what was sown years ago. But I’m still grateful for the band of hooligans, religious wackjobs, criminals and ne’er-do-wells who came over on that boat in 1620.