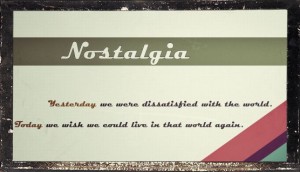 Again, many thanks to awesome RtB fiend Ross for the great guest post yesterday. I loved it, because it got me thinking about lots of songs from my past, and indeed, music in general, and its mysterious power to affect heart and soul far more than any spoken word.

Isn’t it something how music can evoke such strong, associative memories, as if the events just happened recently? For instance, I can’t listen to Elvis’s gospel music without thinking of my mother, even though it was in the early 70s that she and I were in the same room with those records. I can’t hear the old close-harmony male quartets of the 1950s without thinking of Dad, and how he’d let me play his Suddenly it’s the Hi-Lo’s (before I ever knew what a Gene Puerling was) and The Four Lads Sing Frank Loesser albums over and over and over without ever saying Turn that stuff down!, like he did when I played my Beatles, Monkees, Al Green, Jackson Five and Rod Stewart records.

I can’t hear songs from The Sound of Music, The King and I or My Fair Lady without being transported back to my living room floor as a 14-year-old, sitting in front of the enormous stereo that looked like this and memorizing every note of every tune, wishing that I could play the King of Siam or Henry Higgins on Broadway, because men got the best songs. (To this day, I can recite the completely mean-spirited — but delicious — Why Can’t the English?, verbatim.)

But the nostalgia isn’t all that gets me about listening to music. Cripes, I could write a dissertation on this. Being a singer, I’m unsurprisingly partial to the places songs take me (the definition of “song” being poetry set to music, therefore sung, as opposed to a sonata or symphony or concerto, which is instrumental). Regardless of the subject matter, some songs resonate with me for years; decades, even, and the connection is largely emotional. If you were to do a study (and I’m certain someone has, somewhere, sometime) on the psychological effects of the chromatic-fourth descending bass line in modern song, I’m sure you would find important links to certain emotions — mostly, melancholy or outright sadness. Get out your guitar or piano and play these changes in a slow four:

That progression, present in dozens of songs I can think of, and probably a hundred more, dictates a definite set of emotions. Consider just a few songs in which it’s used exactly as above, or pretty darn close:

I can’t think of many (any?) “happy,” chirpy songs in which that device is employed, though they may exist. And I don’t think it’s entirely because there are few happy songs in minor keys. It’s a musical trick, designed to elicit the same emotional results every time: disquietude, nostalgia, sadness, loss, loneliness, uncertainty. And for me, it works, without fail.

I could go on for hours, but I have to get stuff done. So how about you? What music is transcendent and intensely meaningful for you? I’ll bet you can think of quite a few examples.

Ross’ post certainly made me go searching YouTube (again for the umpteenth time!) for Eddie Van Halen videos. I could listen to him hammer that guitar forEVER. The Wizard of Oz is probably the one musical that brings back the most memories for me. Seeing it in color for the first time at Grandpa and Grandma’s since they were the only ones with a color tv was awesome, I remember gasping along with everyone at how beautiful Oz was (is). Watching it was an annual event, munching on popcorn and singing along. Of course, The Sound of Music is right… Read more »

I can just imagine what life was like, growing up with two music teachers as parents! I would have loved it, I know. (I was raised by a homemaker and a cost accountant.)

The first-ever outdoor concert I attended was Chuck Mangione at Blossom Music Center. Love, love, loved it. Did you ever play flugel in band?

Thanks for the kind words, doll — I hope I can be an inspiration to my students the way my music teachers were to me, and the way your folks obviously were to you!

The first album- on cassette- that I played to disintegration was Styx ‘Paradise Theater’ which reminds me of playing hockey in our Montana basement. It’s also kind of the end of the innocence for my brother and me; we moved to California and our new neighbor is washing his car to Van Halen’s “Unchained” and my 7th grade older brother, who would have said that either Styx or Disco Duck was his favorite album at that time said to me, “I will NEVER listen to that music!” It’s all downhill from there: Three months later he’s growing his hair out,… Read more »

And you Ross? Or were the good little brother. ? And yes, moving to California can be life-changing. I moved there when I graduated from college to take a music teaching job. I was living in cold cold Michigan where I grew up and California also changed my life. Again, I won’t elaborate but I am glad that social media was just starting and wasn’t the huge entity it is today. My fall from grace was going to a Kiss concert. I had no idea who they were, I got to go because someone got sick and his friend asked… Read more »

Another corruption by KISS … I was the younger brother who learned from his mistakes, but not ‘learned not to do stupid things’ but more like learned not to get caught.

Look what California and rock and roll did to you both.

You know…I never got into Van Halen or Styx, good as they were. Good thing there were lots of artists to go around. But Aerosmith, Queen, Boston and Maynard? Thumbs up.

Some of the longest memories and certainly the longest “love affair” I have had are engulfed with music. It remains to this day the most important condiment in my life. I was 1st chair trumpet player all through grade school then fell in love with football in High School and dropped out of band…can still play Cole Porter’s “Begin the Beguine.” Of course being a High School child in the 60’s (1963-1967) we were eye witnesses to the entire landscape of the revolution of music and the continuing evolution of Rock n Roll…the British Invasion. I remember listening to KAAY… Read more »

I didn’t know you were a trumpet player — whaddya know!?

And Magic Carpet Ride…it’s amazing how you and I have very different memories attached to it. I can only imagine the emotions and the strength of the memory of Viet Nam the music brings to you. You were fighting off death while I was practicing my dance moves as an elementary school kid.

I’d totally forgotten that you came to a gig! Next time we meet, I’ll find a piano and sing ya anything ya want.

I will hold you to that Finkster!

Music brings a flood of memories back for me!! Great musicals that I had the opportunity to work on with you, of course!! I drove to 4-H camp listening to Boston, Bread and the Eagles (on my 8 tracks!!) Before the Sadie Hawkins Dance my Sophmore year, we went to a pizza place in Mansfield, Ohio that had “follow the bouncing ball” sing along!! Ya don’t see that anymore!! And you singing “Pennies in The Stream” anytime I asked at your gigs! I could go on and on, but I think everyone has lots of music related memories! Thanks for… Read more »

Bread and the Eagles on 8-track! Singing Moonlight in Vermont for you — great memories all, Penny. And I do remember the “follow the bouncing ball” stuff! And they don’t even do Sadie Hawkins dances around here anymore, do they? Man, those were the days…

Love the blog!! Thought of a couple of other music memories: my mom and dad dancing in the living room to CCR, The Carpenters and The Mamas and The Papas!! Also, I sang “You Are My Sunshine” every night to Braden at bedtime when he was little!!

I love how you gave your son your family name. And CCR…oh my, the memories…

I agree with everything said music is great, and there is no other thing like it out there! Weather it be Johnny Cash with Gramps or Billy Joel with my Aunt, and of course my all time favorite Bob Dylan with my Dad! Music has always had an effect on my life it can mend anything from headache to heartache, and all those people out there who say “I don’t like music all that much.” have that one song the will cry, laugh or simply tap there toe to. Some of my favorites and meaningful song for me are: 1.… Read more »

I like your taste and style, Marshall. Not to “out you” or anything, but to my other readers: this boy is a freshman in high school. What a great catalog of music for him to be listening to at such a young age! I know your grandparents are a wonderful influence on you, both in music and in life. You are fortunate indeed. Vincent, in my opinion, surpasses American Pie as McLean’s best song, both lyrically and musically. And Positively 4th St. is my fave Dylan song; it’s the ultimate slam for a friend’s betrayal (You say, “How are you?… Read more »

I never liked the broadway version all that much either. I really like Tim Burton’s movie. (Believe it or not…)