Today’s post is written by my online writing Yoda — a talented (and published) writer, who has inspired and encouraged me since our chance email meeting back in 2008, after I read one of his “5 things” articles in one of the many magazines for which he freelances. Anything he writes is interesting to me. I admire his style, his attitude and his sense of humor, and I’m proud to call him friend and mentor, even though we’ve never met face-to-face. It’s my pleasure to have RtB pal Ross guest-post for us today. Enjoy his take on some musical stew.

Thanks for the space and the patience, Fink. I had another idea for this guest spot, but felt it was too morose. So I’m going with this, which, I warn you, lacks a satisfying ending.

Here it is: I lose things. Of low to intermediate value. Often. I don’t lose expensive things, and I don’t lose worthless things. My camera? I always know where it is. Every note ever given to me in high school? Still got ’em. Every pair of sunglasses? Gone, all of them. If I started the day with a note of each denomination from $1 to $100, by the end of the day I would be at a loss as to where the $10 went. 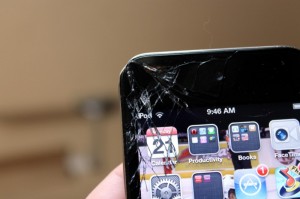 A couple months ago my cracked iTouch (pictured right, not sure why I took a picture of it in the first place) went missing. Unlike times before, this time it didn’t come back. My wife, being the sweet person she is, gave me her 3rd generation iPod, saying she didn’t like the user interface and preferred her iPod shuffle anyway.

Our musical tastes are like middle schoolers in a slow dance: they touch one another but the gap between them is enormous.

On top of that, my iTunes library is not shuffle-friendly. Setting it to shuffle means hearing random symphonic movements and two minute recitatifs. But my wife’s iPod isn’t burdened like that. So I started setting it to shuffle, and heard a few choice cuts along the way: 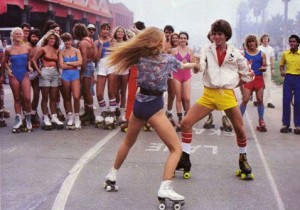 I’m currently having a mid-life crisis, which involves playing ice hockey again. In order to get back into shape, I’ve had to skate around our townhome complex in roller blades. Well one afternoon I was doing just that when shuffle delivered this 50 Cent / Bee Gees mash up. Unexpectedly hearing disco music while rollerblading, well suddenly I understood the decade of the 1970’s. Tube socks, sweatbands, shoot the duck, disco-grooving-white-guy-on-wheels with all the rhythm in the world. It made sense to me.

People think I exaggerate this story, I do not: I went to Dublin, Ireland in 2008 as part of a media junket for the 250th anniversary of Guinness. The group consisted of a couple writers and some magazine editors and we went out to pubs or bars every night. On one of the last nights as we were returning to our hotel we came upon a crowd big enough to clog the street. A fight? We’d seen a few, but no. We get closer, and there’s a homeless-looking street musician playing Summer of ’69 on a nylon string acoustic guitar … and everybody was singing along. They were singing like it was Auld Lang Syne on New Year’s Eve, drowning in emotion, arms around one another belting it out. 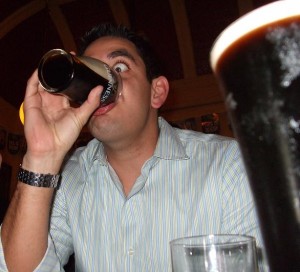 Then it hit me. “Hey, this happened at the pub tonight. Last night too. And at the restaurant our first night here. And–”

Every time this song came over the sound system in Dublin—radio, in-house DJ, cover band, no matter, every time—life stopped so that each and every person could sing along at the tops of their lungs. Every. Single. Time.

The Beatles: Two of Us

There are at least four tracks laid down in this world that take both my wife and me back to a profound loss, and this is one of them. When this came on Shuffle I scrambled to hit the advance button. My wife says, “My iPod is the iPod of a happy person.” Not all the time sweetheart and you know it.

I was 11 or 12 when this song came out, and it become that song, the song the lyrics of which I was wrong about for years. The line is “There’s nothing that a hundred men or more could ever do.” I sang, “There’s nothing that a hundred men on Mars could ever do.” I remember exactly where I was when I was corrected: outside my friend’s mother’s condo lit up by a streetlamp, watching friends Cori and Kevin howl at me. At any rate, the harmony on that chorus does not get old.

Here’s an artist my wife and I agree on, one hundred percent: We are huge fans. I always knew he’d flunked the 9th grade, but not until I read his bio over at Rolling Stone did I learn he flunked it three times. As his class is wrapping up their junior year, he’s failing out of freshman year, again. Can you imagine what you’d have thought of that kid? I know what I would have thought.

Slowly I began adding my own music. One day I was looking through the alphabetical list of songs trying to find one called “Enter Tragedy” by the melodic death metal band In Flames. Found it, played it. With shuffle off, when it was over the next thing I heard was Eddie Van Halen’s “Eruption.” And then—Vladimir Horowitz playing Moritz Moszkowski’s Etude in F (Op 72).

To be chronological about it, I played Horowitz again, first this time, followed by Van Halen. Are there similarities? Yes, but they’re something of a stretch:

Of course, Horowitz’s playing style is simply impossible to copy. Who would teach their student to keep their hands so flat, or to curl up their left pinkie the way he did? Here Horowitz smokes through the Etude, afterwards marginalizing it as no better than “an after dinner mint.”

It’s impossible to find footage of Eddie playing “Eruption” as it is on the 1978 album, so here it is played brilliantly by a 14 year-old:

So the adventures are done, I’ve taken over the iPod and made it my own. Here’s where I say “Y’know, looking back, I think I kinda miss that ol’ shuffle…” but I don’t. I miss Dublin and I miss who Two of Us is about, but I’ll use the World Clock before I use Shuffle again.

8 thoughts on “Adventures with Another’s iPod”