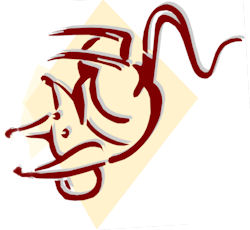 It’s the first day of my Christmas vacation. I love it. Well, I loved it until 5:30 a.m., when I stepped out onto my back porch to let Rousseau out, and promptly fell down the stairs. It was fantastic.

So I decided to treat myself to some coffee and extended quiet time, along with a huge dose of feeling sorry for myself and my sore ribs, janked back and neck, and smashed-up ankle. I ended up on FolkStreams.net, and got lost in a wonderful wildernesss for two hours.

I believe it’s crucial that our myriad social customs in America — age-old and often passed down by oral tradition only — be preserved before they’re irretrievably lost. The people at FolkStreams have put together a large collection of documentary films about anything and everything having to do with the American experience, and they’re all available for viewing online. Easy to disappear for hours, at least for me. From their site:

Folkstreams.net has two goals. One is to build a national preserve of hard-to-find documentary films about American folk or roots cultures. The other is to give them renewed life by streaming them on the internet. The films were produced by independent filmmakers in a golden age that began in the 1960s and was made possible by the development first of portable cameras and then capacity for synch sound. Their films focus on the culture, struggles, and arts of unnoticed Americans from many different regions and communities.”

This morning, I watched three films. One featured a group of black girls on a playground in 1968. The dynamic of play and interaction between them was fascinating. Then I watched a storyteller/singer spin the tale of Frankie Silver, a North Carolina woman who purportedly killed her husband and was hanged in 1833. Finally, I learned about gandy dancers on the railroads during the first half of the 20th century. Amazing stuff.

I highly recommend this site to anyone with an interest in little-known components of American cultural history; anything from old carnival barks to a cappella ballad singing in the Appalachians, to the Sacred Harp or Delta blues traditions. In some cases, these films — with priceless interviews and vintage film footage — are all that’s left.

I know it’s not Avatar or Sherlock Holmes, but satisfying and educational nonetheless. Thumbs up.

Happy Saturday — I’m off to replace the ice in my sock.