Couple of nights ago, I sat at my computer doing some work while the Thriller took a break from studying and turned on the History Channel. What I heard for the next 30 minutes was a bizarre tale — totally new to me. I was surprised to have never heard of it before, so I had to dive in and research him. Perhaps you know about this guy, so this won’t be new. But in case you haven’t, read on… 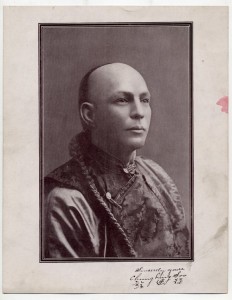 This is the ultimately tragic story of the famous magician, Chung Ling Soo (1861-1918). It is a fantastic tale, in more ways than one.

Why fantastic? Well, see…Soo was not Chinese at all, for starters. His real name was William Robinson, born to Scottish parents in New York City. He was indeed a talented illusionist, but uncomfortable with performing in front of people as “himself.” He struggled with connecting with an audience. So, much like his real Chinese counterpart, magician Ching Ling Foo, he adopted the Cantonese persona of Chung Ling Soo. This enabled him to retreat into silence while doing his act, relying only on his amazing talent as a magic master to wow audiences everywhere.

He claimed to have never mastered English, and gave interviews through an interpreter (even though he did not speak Chinese…whaaa?). No way would that fly with today’s media. But the public of the late nineteenth and early twentieth century ate it up. The guy was a hit. He traveled the world with his act, which thrilled audiences and featured his wife as his assistant (she was also American). 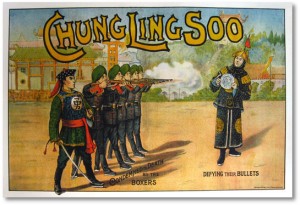 Soo’s most famous trick was the “bullet catch.” An assistant would load a rifle with a bullet in full view of the audience, then aim it at the magician and shoot. Soo would catch the bullet in his teeth, wowing the shocked crowd. Actually, the barrels of the guns were modified so as to expel a burst of gun powder, but not fire the bullet. In an article in the Guardian, I discovered that magicians of the time thought the trick was cursed, because several performers had been hurt or killed. And unfortunately, such was the case with Mr. Soo:

On that early spring evening in 1918, the theatre was buzzing as Chung Ling Soo prepared to perform the trick. The rifles were loaded by his assistants; they took aim with the muzzles pointed directly at the magician. The command to fire was given, the sound of two shots was heard, and Chung Ling Soo fell to the ground. But he was never to get up again. Within hours the greatest conjuror of the age – friend to Houdini, and a man who claimed to have performed for the emperor of China himself – would be dead from the real bullet that entered his body and pierced his lung, causing massive haemorrhaging.

Yikes. It was reported that, after an entire career feigning to know only Chinese, his last words were spoken in perfect English: My God, I’ve been shot. Lower the curtain.

And with that, the “marvellous Chinese conjuror” was no more. Bill Robinson died from his wounds the next day in a London hospital.

A very interesting account of his 1909 Australia tour is here. Bizarre, sad, fascinating. We got it all here at RtB.

Yikes is right! Has The Thriller (and you, of course) seen Dynamo? That guy is really good! His illusions/magic tricks are mind-blowing. He’s all over You Tube.

No we have not! We’ll have to check that out. I’m not nearly as “into” magic and illusion stuff as he is, but it’s all really interesting. We watched The Prestige last night (second time; we’d seen it several years ago as well), and their tricks made me crazy. How did they DO that?

Thanks for the suggestion! I’ll have him look up Dynamo.