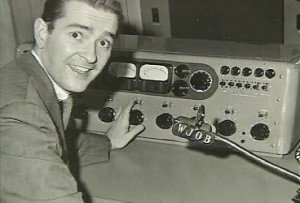 As I made some hot tea this morning, I said to myself, “It’s Sundaaaaaaay.” It brought back a memory of listening to WLS (Chicago) and WOKY (Milwaukee) radio stations as a kid, and hearing the commercial announcer say, “Sunday! Sunday! Sunday!”, after which he would inform listeners about upcoming drag strip races.

I was curious about who started that particular pop-culture oddity. We’ve all said it at some point; how did it become such a phenomenon? A little digging brought up a man by the name of Jan Gabriel.

NPR, among others, did a tribute to Gabriel after his death a little over a year ago. Take a listen from All Things Considered:

~
What sticks out in my memory is the line, “‘Big Daddy’ Don Garlits and the Little Red Wagon!” I don’t know who else drove in all those drag races, but it seemed “Big Daddy” Don Garlits was at every one of them. I wish I could remember more names; some of them were funny.

The name “Rat Fink” is related to drag racing. That’s also funny, because the only dragging I’m doing is to the kitchen for some more tea — slowly. Much to do this day, the most of important of which is seeing Justin and Jake for a few moments for brunch. Yay for me!

Never been to a drag race. Don’t understand the fascination, but hey, what do I know? Sunday was always church day – kind of goes with the territory of being a Preacher’s Kid – but afterwards we always went to lunch at a restaurant, which for us was a huge treat. So after church we kids (4 of us) would all bundle in the car and wait for mom and dad to quit all the grown-up yacking and get down to business – LUNCH. We would always turn on the windshield wipers, the radio, the blinker, the headlights, the fan… Read more »

I remember waiting in the car, too! And did your mom and dad just roll with the joke? My parents wouldn’t have been *at all* amused if I’d left the radio blasting when they turned on the ignition. YIPES

Oh, sometimes he’d laugh and pretend to be all surprised. But he was also a moody musician-type so some days he was not-so-amused, but he didn’t yell or anything.

So Rat Fink is derived from drag racing? I had no idea. Care to enlighten, or do I need to look it up?