Well I hope everyone had a lovely Christmas Day! We did — we drove to Cleveland for some casino fun, then came home, had dinner, did some light chores (the living room is back to its normal state, per the Christmas Day custom around here), and watched War Horse for our evening entertainment. A good day.

But there are changes.

Our sister and sister-in-law were supposed to be here today, but thanks to this… 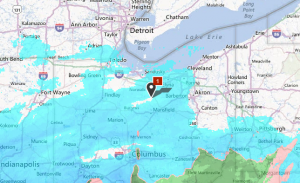 …it’s not happening yet. And they’re still weighing their options with regard to being able to make the drive from Kenosha (WI) at all, which makes us sad. Dang blizzards anyhow. Nary a flake since last winter, and the minute you schedule out-of-town guests, it’s all this. Nuts. Hopefully, it won’t be as serious as the weather guys are saying it will be, and they’ll be able to make the drive with little or no problems tomorrow or Friday. Not likely, though.

I just let Rousseau in, and — as you can see on the little white area we’re in on the radar image — the snow is not falling yet (6:02 a.m.). But, any minute now it’ll be here, and the beginning of everyone’s week will change.

But that’s only half the change I’m talking about this day.

The Thriller and I use Christmas Day, when our kids are all visiting other relatives and having Christmases of their own with their children, to discuss plans for our upcoming summer vacation — which, in this case, is a mere six months hence. Since last summer, the plan has been to go to New Orleans and some other Gulf cities. Usually, once we get the major destination in mind, we’re beside ourselves with excitement, and it’s all we talk about for weeks after. For some reason, it wasn’t that way this time. Not that we didn’t want to go to N.O. — we did, and we do. But, just maybe not this summer.

We have basically one more shot at a large, long vacation, since the Thriller graduates seminary (hopefully) this April, and the kind of time frame we’re accustomed to in the summers will evaporate. So we decided to put New Orleans on the back burner and go when we had 4-5 days to escape in the future.

And where is this summer’s destination?, you ask. Welp — Vancouver, BC. Now that’s a big ol’ change, yes? Nothing slight about that. We’re excited, though. The magpie chatter is back, so we think this might be where we’re supposed to go this year, saving the Gulf for next time. And with that, let the monastic lifestyle begin. Gotta save some bones so we can drive to the other side of Canada in six months.

Yay. Have you been to Vancouver? We have not. And when we hit North Dakota, Oregon and Washington, I will have been to every state in the lower 48. (The Thriller is only one state behind me: he’s never been to Maryland.) After this, if we want to expand, we’re going to have to resign ourselves to the unlovely prospect of getting on an airplane.

OK — it’s now 6:23, and I looked at an updated map. Fort Wayne is about to get it,  as are most points west and south of us. Yikes. It might be a bumpy ride after all. Stay inside and safe, everyone.

FO, maybe to Wally to stock up

So sorry to hear that you’re about to get what we got yesterday afternoon….UGH. It’ll sure pretty things up, but I hate the crimp that it put on the family travel plans

LOVE your new vacay destination! I’ve never been either, but have ALWAYS wanted to go. The closest I’ve been is Seattle. I’ve got a couple good online chat buddies who live there & have been begging me/us to come up for a visit. Can’t wait to hear all the remaining details! BTW, are you still headed this way for a little sing-fest in June…??

I saw your picture on Facebook — wow, I’ll bet people were slip-slidin’ all over the place (and making you crazy)! Were you guys going to go somewhere? That is nutty weather for that far south.

Yes! I’m looking at any two days during the week of June 9-15. Whatzat do to ya?

We were headed over to BluVox’s boss’ place for Christmas din-din… fortunately the ground was still pretty warm, so streets were just wet. Overnight of course it froze, but once the sun was out, things in the street started to melt. We’ll be OK by tomorrow for sure!

Vancouver? I hope you like Chinese food. When we went on our Alaskan cruise we departed from Vancouver. We were only there a day, but I remember walking around the city for hours trying to find somewhere to eat that wasn’t Chinese. There was an overabundance of little Chinese places. *gag*

Glad to hear you had a great Christmas! Stay safe today!

We HATE Chinese food! In all iterations, we hate it. Fortunately, we will have Le Cooler with us, so all we’ll need to do is find a grocery store. Thanks for the tip!

Vancouver! Interesting city and fairly clean as well for a large city. Oddly enough, I “entered” the U.S. in Vancouver and most of the immigration authorities were of Asian decent! Go figure!

Well that would jive with what Meg said about the restaurants! Weird. It’d be interesting to do some immigration research behind the phenomenon.