Such is the weird case of D. B. Cooper, the airline industry’s first hijacker.

It’s unthinkable nowadays to consider putting passengers on an airplane without a thorough bag-and-body check, but it was done every day with impunity until after the Cooper hijacking – and even then, it wasn’t nearly as thorough as it needed to be. I remember flying to Europe and back in 1976 without so much as a sideways glance into my luggage by anyone. 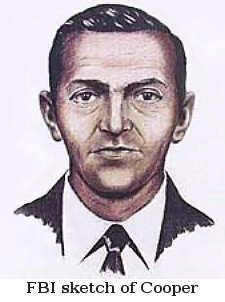 On 24 November, 1971 in Portland, Oregon, a man identified on the manifest as “Dan Cooper” boarded a Northwest Orient Airlines Boeing 727, sat in seat 18-B, and gave a note to a stewardess:

I have a bomb in my briefcase. I will use it if necessary. I want you to sit next to me. You are being hijacked.

He then instructed the girl to tell the pilot to land in Seattle, where Cooper would hold all 36 passengers hostage until Northwest Orient delivered $200,000 in unmarked $20 bills and 4 civilian-class parachutes.

Everybody complied. He got the money and the chutes, and then released all the passengers and flight crew, except for one attendant and the pilots. He ordered the men to take off and head for Reno, flying at only 10,000 feet and at minimum airspeed, which was about 196 MPH.

Shortly after they were airborne, Cooper opened the aft stairs (the long stairway underneath the plane, below the rudder), and disappeared into a thunderstorm – and into the unknown. Neither his body nor his parachute have ever been found, and his identity remains a mystery to this day.

Over the last 4 decades, several theories have been pitched at establishing who “Dan Cooper” was (the “D. B.” part of the name was a newspaper misprint that just stuck). None save one – the copycat hijacker Richard McCoy, Jr. – ever really panned out. And even that one is suspect. Doesn’t matter now anyway – the FBI shot him to death after he escaped from prison, where he was two years into a 45-year sentence for a 1972 hijacking. 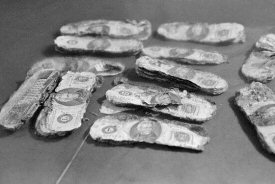 state. They were later determined to be the same bills that Cooper extorted from Northwest Orient. Last month, a bulldozer unearthed an old, tattered parachute in northern Washington. But just today, the skydiving expert who actually handed the chutes to Cooper back in ’71 said that there’s no way it was the one he gave the hijacker. Case open – again.

Creepy side-note: one of the chutes they gave Cooper was a dummy – inoperable; used only for classroom demonstration. Yikes.

Off to make the best of my sick day.

1 thought on “A riddle wrapped in a mystery…”