Now here’s a movie that bites back. Personally, I think it’s silly, cheap humor — moronic, even. But you know…the entity called “liberals” has enjoyed mainstream popularity, which some would even call a monopoly, in entertainment over the last three-plus decades; anyone with gray matter knows that. Consequently, the animals called “conservatives” are generally — not always, but in general — depicted in their movies as loopy wackjobs or warmongers with no social conscience. Puppy kickers. Therefore, some liberal filmmakers love to pile it on thick (and some conservatives can’t take a joke).

Well, it seems the shoe is temporarily on the other foot. And I must say, I think the trailer is funny. It’s not right or sane or high art or politically correct — but it’s funny. And it’s causing all kinds of uproar.

Of course, I refer to American Carol, the new Zucker film, due out in October. The trailer shouts names like Kelsey Grammer, James Woods, Dennis Hopper, and “Rosie O’Connell” (HA). But what might be most offensive to those who stray to the left of center is the cameo by Satan himself: Bill O’Reilly.

I wonder why I can’t find the trailer on imdb.com or rottentomatoes.com…but O’Reilly got it. Maybe because he’s “in the cast” now. Or maybe it’s a liberal conspiracy. (KIDDING, geez)

Personally, I think many liberals would take it with a grain of salt — even laugh at it. It’s only the most mature, confident and self-realized people who can laugh at themselves. [It’s the ones who love to pitch the poo but not occasionally catch it who make me mad.] Liberal or conservative, if you can’t take a joke, get out of politics.

Yikes. I guess that’s why the word “satire” is often preceded by the word “biting.” David Zucker is no Republican lemming, however. This Weekly Standard article gives a solid look back at how Zucker came to be what he is: a rare advocate for nationalism in Hollyweird. 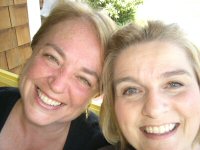 Annnnyway…on to another ambivalent topic. My visit with Kay yesterday was both wonderful and sad. We laughed a lot, took the obligatory “I’ll hold the camera at arm’s length and we’ll see what happens” photos, I made my famous cheezers for Bob, and we helped them clean up and get ready to leave.

It’s now 9:15 a.m. EST — Kay’s probably on the 3rd leg of her trip back to Slovenija now, if not there already (Bob is not far behind, on another flight). And another school year begins…

Have a great weekend, liberals and conservatives all. Fink out.

5 thoughts on “A rare turnabout”