On this Mother’s Day, I want to introduce you to someone very special.

Barbara Ann Martin was born on a farm in the tiny little unincorporated village of Russell, Illinois, on 13 September, 1938. There wasn’t much to the town back then; just a main road and a bunch of little farms, right up on the Wisconsin border. It hasn’t changed much. She was the eldest of nine children, all born at the homestead. 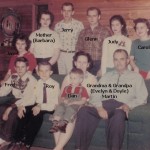 Here is the only family photo we have of my mom and her sibs, taken circa 1958. The Martins were poor, and not many photos exist at all — at least not by today’s standards. Mavis let me borrow this one from her wall to scan it. I listed all the names of her brothers and sisters (click the photo for a larger view). I remember being in about the first grade and feeling oh-so-smart when I could recite all their names in order of birth: Mommy, Jerry, Glenn, Judy, Carol, Janet, Fred, Roy, Danny!

In 1957, my mother married my biological father. He was a musician (surprise!); a guitar player, singer and songwriter of country & blues music. According to the stories I’ve heard (I’ve never met him), he was handsome and talented. But things happened; I’m not sure what, exactly. The wheels fell off, and my mother filed for divorce. 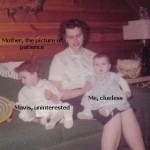 We went to live with Grandma and Grandpa Martin. When I was 9 months old, Grandpa died of a heart attack, leaving my grandmother with five children under the age of 18 still at home, and no job. Times were hard, but she made it. All the kids worked. My sister has a faint memory or two of this time, but of course, I have none. 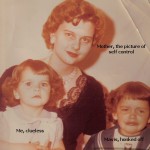 My mom worked hard, too. She put in long days and evenings at the Leader Department Store, where she worked in the ladies’ department. There she befriended an older co-worker named Allene Johnson — herself divorced from an abusive alcoholic and now remarried to a wonderful man who taught 8th grade history. Her son, Charles, a Navy veteran who served on a destroyer in the Mediterranean during the Korean War, had just graduated from Augustana College with a degree in accounting, and was hired to work for the Fansteel Corporation in Chicago. Allene thought it would be nice if Barbara came to dinner on Sunday. Oh, and did I mention that Charles would be there, too? Little matchmaker… 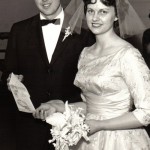 That chance meeting turned into a life-changing event for my mother. She married Charles Collins on 5 May, 1962 (in a powder-blue gown, because previously married women did not dare wear white), and he immediately adopted my sister and me and we took his name. My mother destroyed our original birth certificates and kept only the ones where Charles was listed as our father. I really wish she hadn’t done that, because now, neither I nor my sister can possibly hope to find our biological father.

So, Mother had a wonderful life as the wife of a successful accountant. She never had to work another day, and she enjoyed being a housewife and mom. They ended up in sunny Florida, settling down in Ocala.

On 28 December, 1995, tragedy struck our family. My beloved dad was killed by a blood clot that broke loose from his leg and traveled to his heart. He died in the hospital, two days after a successful open-heart surgery. The last time I spoke to him was on Christmas morning, 1995, right before he went to the hospital. We had our typical conversation: joking about politicians, laughing, and poking fun at each other. The last thing I ever heard him say was, “I love ya, doll.”

After his death, living became a chore to my mother. She was never the same. She secretly began to “forget” to take her medicine (she had congestive heart failure), and on 18 July, 1996, sometime in the night, she slipped quietly away and joined Dad. She was only 57 years old.

Most days, I’m fine. I have my memories to sustain me. But other times, like now, I get teary because my parents never got to see my sons grow up, and they never got a chance to know Jake, my own grandson. I can’t talk to Mother when I’m down, or when things at work go south. I can’t ask her advice on anything, or take her to lunch and a matinee. I can’t talk to Dad about sports or politics, or snuggle up next to him on the couch and watch the six o’clock news. But I am comforted by the feeling that they are smiling down on me right now — even as I write this.

Sorry about the length of this post. If you’re still with me, and you are one of the lucky ones who still have a parent to celebrate Mother’s Day or Father’s Day with, take this advice: tell your folks you love them. Say it every day. When you get angry with them, remember how quickly and unexpectedly life can change. Don’t waste a minute. Heal old wounds. Dissolve old feuds, and drop old grudges. Become a hugger. Forgive, and ask for forgiveness. Truly make the most of your life, because we are not long in this world. I believe that our parents are gifts to us just as much as they believe we are gifts to them. Don’t take for granted a second of that magic.

1 thought on “A fond tribute”