Not a grain or a morsel or a modicum. But truth, right in your face.

For the first time in, oh, fifteen years or so, I watched the Oprah Winfrey show, tuning in yesterday completely by accident while confined to the couch. It was an amazing revelation.

Like many of my friends (and UNlike 99% of the men I know), weight issues have ruled my consciousness — indeed, my very existence — since I was a young teenager. Concern gave way to obsession, and as is almost always the case, obsession bred despair. Losing and gaining the same 25 pounds every six months since 1980 can take a toll on a person. 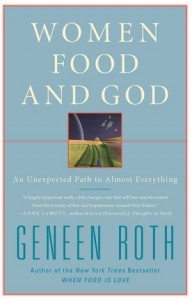 Enter Oprah and her guest, author Geneen Roth. When she told the audience that Roth’s book “opened [her] eyes” and allowed her to make sense of everything surrounding her 40-year battle with weight, I was curious. Cuz girls, you know it ain’t about food, or being hungry. It’s never about being physically hungry for people like us, is it? There’s always a hidden agenda with food.

As is Oprah’s style, she made sure everyone in attendance had read the book as well, and audience members were definitely part of the show. There were many personal stories that sounded awfully familiar. Several women had been charged with videotaping themselves going through their daily routines for a week or whatever. Wow. Revealing. Even more shocking were the admissions by some women that when they lost a hundred pounds, they were still unhappy. To someone like me (the last time I wore a size 7 was 1974), that was a difficult concept around which to wrap my reptilian brain. It was then that I decided I must see what is in this book.

And although what Roth gives in the way of practical tips isn’t necessarily new to repeat diet offenders, seeing and hearing how the book changed people on a non-food level was new to me — and believe me, fiends, I’ve read every diet book ever published. Much of what she said was highly personal with regard to figuring out why those of us who run the diet treadmill always fail. (Again – it’s *never* about the food itself; food is just the drug of choice to numb or escape other, more sinister issues.) You can read a partial transcript on Oprah’s site.

So I ordered it from half.com. I’m totally disappointed it wasn’t available for the Nook, though. What’s up with that? #1 on the NYT Bestseller List, and you can’t download it? Sheesh. Guess I’ll have to just open the thing and turn the pages myself. The nerve. Anyway, I’ll provide a review in the near future. I know there’s no magic bullet in this fight, but what I heard yesterday suggests that there are ways to move emotional roadblocks that habitually impede progress. That would be a step in the right direction for many of us.

Hey, it’s Tubesday. One day closer to school starting. It’s this time of year when I’d just as soon get the days overwith so I can get going. May as well jump into the fire right now as delay the inevitable. Hot tea, soup, and a bowl of oatmeal all day yesterday, and I still feel like ten miles of bad road. That just bites, honestly. Maybe it’s a tooma.

8 thoughts on “A boulder of truth”