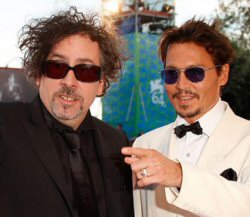 And it’s based on one of my all-time faves: Dark Shadows.

PK and I both saw the same article that quoted Burton confirming the rumor at Comic-Con last week.

You know, you either love TB/JD movies or you hate them. I’ve never spoken to anyone who had a resolutely ambivalent view. Maybe that person is reading this now — if so, feel free to weigh in. (Not that it will make me adore JD any less…)

Burton and Depp are pigeonholed lately; maybe it’s their own fault. Probably is. But why not do what you do best? People can yammer on about it being the “same old thing,” but let’s face it: these boys are wealthy beyond what you and I could likely ask or think, da? Somebody likes their stuff. So what’s the problem? Ah, I know. Everybody need a little schadenfreude in their day once’t in awhile. They want to see successful people fail.

Clearly, not everyone is a fan. I laughed when I read this comment on the above article:

Johnny Depp is a talentless egomaniac who makes puerile remakes of classic movies in a never-ending quest for the almighty dollar. Tim Burton is also a talentless hack, so the two were made for each other.

Personally, I could substitute any number of actor/director names – couldn’t you? It’s all good, and opinions are like…well, you know. Anyway, back to Dark Shadows.

I listed it as #9 on my Top Ten TV Shows According to Me post over a year ago. (Of course, that was before I started really getting into Mad Men.) If you read through the explanation of the Barnabas character over at Wikipedia, you will see what a complicated and unusual series it was for the late sixties/early seventies. I never missed a single episode if I could help it. It was great because it came on at like 3:30, along with other soaps. Fortunately, my mom’s soap operas were over with by that time, so Mavis and I came in from outside  faithfully every weekday to watch it. I’m surprised she let us, truthfully, what with all manner of evil and vampires and scary moments and zombies & such in every episode. I was like eight years old when I started watching it.

Although I sport a small bias, I think JD will be equally dreamy and creepy as Barnabas Collins. So what if it’s another remake? Haters, anyhow.

Hey, Jake and I had a ball yesterday. He loves his alphabet computer game. Such a lil genius… 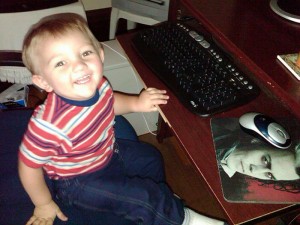 Mavis comes over today, and we’re starting the lasagna for the feast tomorrow night. Like me some Italian food. Thank the gods it’s Finkday — have some fun this weekend, fiends. Happy Birthday to the Thrilla….

Nicotine, arsenic, tanning bed. How do you want to die?

Last night, I read about the latest report by the International Agency for Research on Cancer, which states that they have now upgraded tanning beds from “probably carcinogenic” to “carcinogenic” to humans. So I guess there really is a downside to lying under those lights. Or not. Mayhap most folks won’t mind eventually having Donna Versace skin (click at your own risk). This girl minds, which is why I never ever tan, indoors or out. I’ll take my Casper the Friendly Ghost-ish pall over melanoma any day. But hey, me no judge-y. It’s your thing; do what you wanna do. I can’t tell you who to sock it to…

Truthfully (and admittedly snarkily), I know a few people who would look down on smokers, but would never give up their tanning appointments. Still, I guess anything’ll kill you after awhile, so I really don’t view anyone as reprobate — unless you’re the front office staff of the Cleveland Indians, who, for the second straight year,  just traded away a Cy Young Award winner. But we shan’t go there today.

This made me laugh. From the LA Times:

A comprehensive review of research comparing the nutritional content of food that was organically raised with food produced with the use of synthetic pesticides has found no significant differences between the two.”

Innat just the way? Spend all that extra money for organic food (its sales rake in an estimated $23 billion per year) just to find out it’s not healthier after all. However, the study is a *trifle* misleading, in that it doesn’t address the pesticide issue. Obviously, foods grown without chemicals are probably better for you than those grown with them, ja? Still, it bites that the pretty food isn’t any better for you nutritionally.

We get Jake all day today. Fun! Tomorrow is the Thriller’s 58th birthday. I’d tell you what I’m getting him, but, you know, that would kind of give it away. Not that you’re dying to know or anything…

ANYWAY. Have a great Thursday.

Fink out (the door to pick up Jakey).

But hey, why all the negative energy today? Let’s have us some good news as well.

Check out the dessert I had at the International Buffet inside Greektown Casino. A luscious, sugar-encrusted devil’s food mini-cupcake, filled with sweetened cream cheese and a cherry, and topped with whipped cream and chocolate shavings: 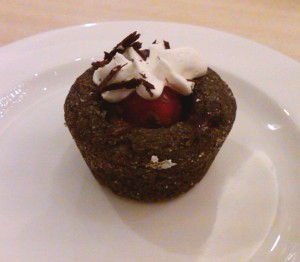 Then, when we got home, we couldn’t believe our eyes. My brother-in-law Ray had culled every single weed from every garden in my yard, front and back. Im ready for my fall bulb planting now. Is he great or what!? 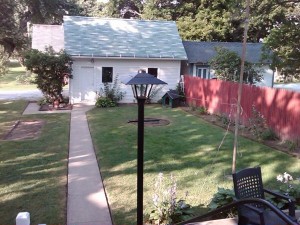 So yeah. In spite of items 1-8, life is dandy indeed — even if it does feel like Monday.

Nope. Because we’re staying on the 23rd floor. Great – better’n last time. But the views really are wonderful, the food is delicious, and we had fun spending money last night.

We arrived in Detroit around 3 p.m., and partied until around 10. Fun! Here’s the pictorial: 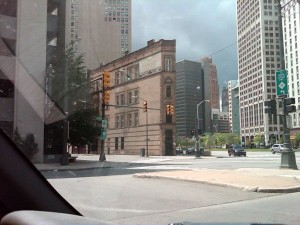 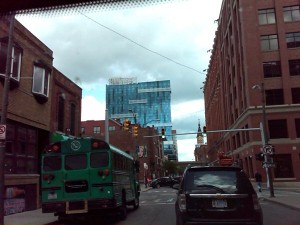 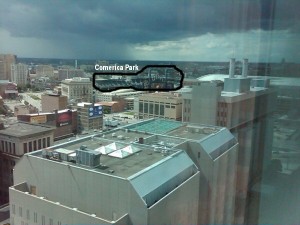 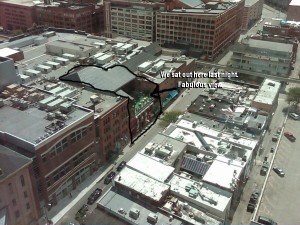 So today, we eat (yay, it’s free) and see some other sights besides the ones in the casino. We may leave this afternoon for home, or tomorrow morning. It’s good to not have to decide.

Fink (and Thriller, hangin’) out.

And it was a whoooole lot better than How I Spent My Saturday, Part I.

Yesterday, I abandoned all work, except for some minor cleaning that I put off till the last minute. Instead, I did what I wanted to do. It was a strange and wonderful experience. Could this be the purpose of summer weekends after all? Here is most of what I did with my Saturday, listed in random order. 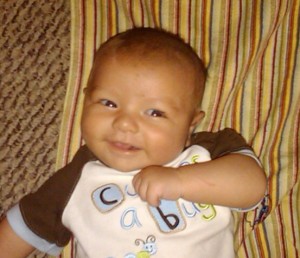 3. Updated some stuff on my Facebook profile, which had sat unattended and lonely for a long time. 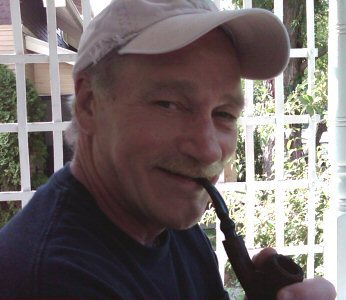 5. Met a friend at an area watering hole. Good times.

And now, it’s 6:48 and I have some things to take care of before Mavis & Ray come over at 11 to get the lowdown on Rousseau and taking care of the house for a couple of days. And at noon, it’s off to the Motor City for a little gambling, considerable eating, and a whole lotta relaxing.

Happy Sunday to all my fiends,