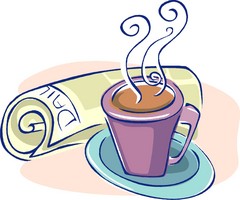 Cuz that’s why you come to Finkville, right?

So I know I’ve been out of the loop for awhile, but what’s all this about a Footloose remake? Sacrebleu! Sacrilege! [I’m telling you, it’s just a matter of time before Wizard of Oz and Gone With the Wind are remade, complete with wanton profanity and blatant sex scenes. Mark me.]

Footloose was huge back in my day, released when I was 25 years old. I immediately went out and bought the record. One of the greatest movie soundtracks ever. Besides the fantastic title song, I loved “I’m Free,” “Let’s Hear it For the Boy” (props to a Deniece Williams who could really sing back then), “Almost Paradise,” “Hurts So Good,” “Waiting For a Girl Like You”… a ton of great tunes on one album, by the likes of Kenny Loggins, Ann Wilson, John Cougar (Mellencamp now) and Foreigner. Yall should check it out if you haven’t.

Something tells me that I won’t like the new tunes as much. But that’s just me being old and crusty. Besides, sometimes it does you no good to complain. Just ask the CEO of Spirit Airlines. It’s actually kind of a refreshing take on doing business, and I would be inclined to patronize them when I booked my next flight…if, in fact, I actually booked flights…which I don’t.

Anyway, I’m just waiting patiently for the premiere of season 3 of Mad Men. Oh yeah. I’m going to enjoy it while it lasts, because nothing like this ever does for very long. Jon Hamm and January Jones will launch into big movie roles and MM will be left in the dust. Advancing one’s career…the nerve.

And a good one it was. Among the best, actually. Maybe really, reeeeeally near the top of my list of all-time favorite shows. Maybe the #1 favorite. Great show, everyone.

On a personal note — I totally enjoyed playing in the pit with #1 Son and Lars (and Drew, too). What a hoot.

OK, so Saturdays are a long haul with this production. We’re all stuck at the school from around 1 p.m. – 10 p.m. with a long wait in between each show. That makes for some interesting choices for the passage of time.

I also noticed that *some people* saw my unattended camera as an irresistible temptation. AHEM. You know who you are, my little felons.

Anyway, here are some “backstage” photos. I hope to have some YouTube stuff for viewing later on. To cast and crew: job well done. Your audiences loved you. And P.S. – thanks for the pretty posies and the Starbucks card! I’m going to spend it soon; like maybe, right meow. 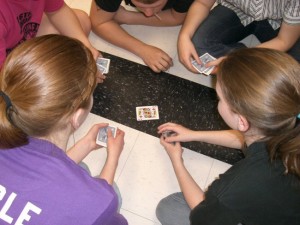 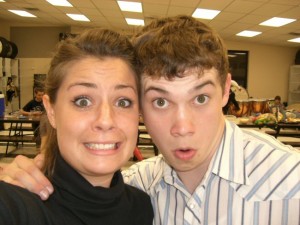 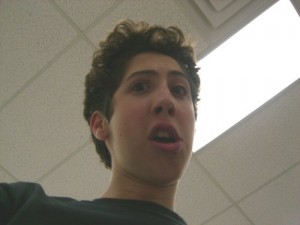 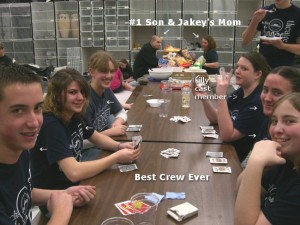 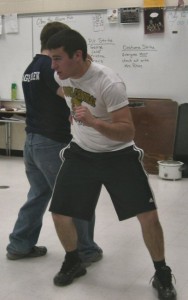 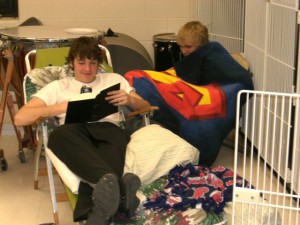 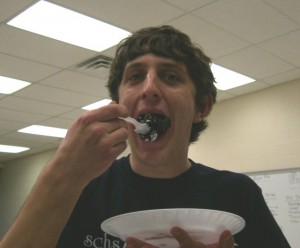 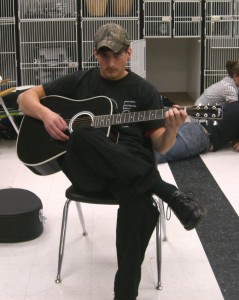 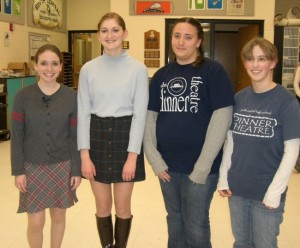 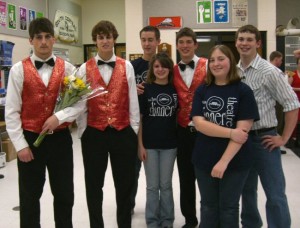 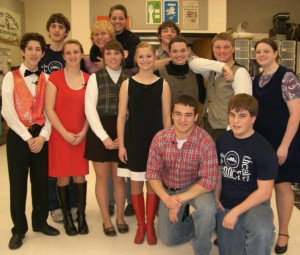 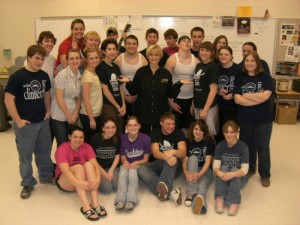 And now, my fiends…back to studying. Fer rill.

And I think I will. Three more times, to be exact.

If they can keep the energy up for three more shows, this will have been one of the most rewarding musical theater productions of my career — simply on merit of the B,S & T it took to get there.

RtB readers/posters Krissy, Meg and Sam were all wonderful on their features. Also, it was great fun to be reunited in the pit once again with Lars and #1 Son. How awesome is that?

So I’m going to take some photos tonight (if I remember). I’ll post some here tomorrow, after it’s all over and we can all breathe again.

Hitting the showers, then the school house. Have a great Saturday, my fiends. 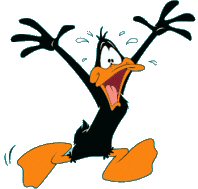 I did forget several things. Hmmm. Setting up my orchestra pit (yes, we don’t have a real performance space, so my pit has to be “set up” in front of the stage). Mic batteries. Folding the programs. Ironing the outfit.

Forgot to tell the cast about twenty things after rehearsal last night. Oh well. Too late now. I was honestly so overjoyed that they actually showed up as actors, I couldn’t say much. Then there was the moment afterwards when someone was blocking the doors and I couldn’t get out of the room…I was sure they were defiling the Mighty Ford Ranger, but I was mistaken. I think they were plotting my accidental death come Sunday.

No matter. It will have been a terrific ride.

Fink, to the ironing board

We’re tired, we’re a trifle loopy, and maybe a little sadder along with the wiser. But we are going to be ready to open tomorrow.

After an intense but productive meeting before rehearsal last night, seventeen young adults reminded me of why I do this. And while we have miles to go before we sleep, it always helps to know we might get there with the wheels still on.

The coffee tastes good for the first time in weeks. And dig this — I turned off my reading light at 11 p.m., and wasn’t conscious again until 4:50. How ’bout them road apples, fiends? Almost six uninterrupted hours of sleep? Sheesh. Dozin’ the day away…

Happy Thursday, and feel free to wish my girl Bando a fractured femur. Her show opens tonight! (Alas for You, dearie…heh)